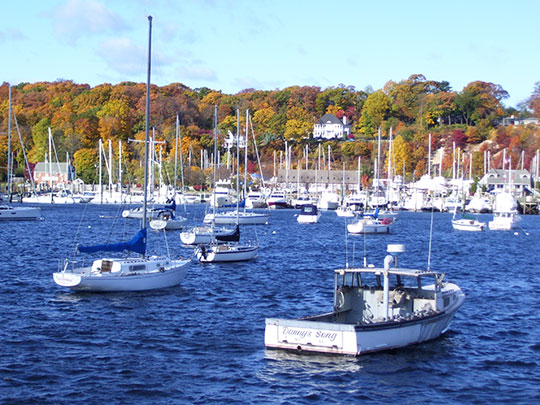 The East Shore Road Historic District was listed on the National Register of Historic Places in 1985. Portions of the content on this web page were adapted from a copy of the original nomination document. [1]

The area known as Halesite lies along the east bank of Huntington Harbor in the center of the East Neck Peninsula. The incorporated village of Huntington Bay is situated to the north while the central commercial area of Halesite lies to the south. East Shore Road is a narrow, winding lane lined with steep wooded banks on the east and the harbor on the west. Due to the steep eastern embankment, the dwellings are located along the shoreline to the west on small, wooded plots. The residences are sited below grade level with their outbuildings (mainly garages) positioned above along the road. The East Shore Road Historic District is bounded by a modern marina and a small, modern commercial district on the south. The northern and eastern boundaries are clearly delineated by modern, single-family residential areas. The harbor forms the western boundary.

The East Shore Road Historic District contains the site of the Brown Brothers Pottery Works, established in the mid-eighteenth century and productive until the early twentieth century. Located on the southern fringe of the district, the site is now within a harbor-front park that was developed in the 1920's. Remaining relatively undisturbed, the site was identified as possessing archeological potential through secondary research sources but it has not been fully documented at this time.

The three settlement period dwellings included in the East Shore Road Historic District are Aunt Sally Scudder's House (c.1800), the William and John Jarvis House (c.1850), and the George R. Johnson House (c.1830). Although altered by additions and later period architectural details, these properties still exhibit settlement period construction techniques in their form, massing, and lack of ornament. Built c.1800, Aunt Sally Scudder's House was originally a five-bay, center-entrance shingled residence with a saltbox profile that was greatly enlarged in the 1940s. Built c.1830, the Johnson House was also originally a five-bay center-hall settlement period dwelling that was remodelled and enlarged by the addition of second story in the 1880s. The William and John B. Jarvis House, built c.1850, is a representative example of a three-bay, side-hall settlement period dwelling with an attached kitchen wing. The dwelling was also "remodelled" in the late nineteenth century by the addition of shingle sheathing and decorative window surrounds.

The majority of the dwellings in the East Shore Road Historic District date from 1860 to 1900 and are typical examples of late nineteenth century working-class residences exhibiting a variety of modest decorative features common to the eclectic architectural idioms of the Victorian era. The dwellings are generally two stories, three-bay shingle and clapboard residences with side-hall plans and regular fenestration. Although their ornament is limited to the cornice line or porches, the buildings exhibit at least one or two of the following architectural details: dormers with bargeboards, pierced/sawn/turned wooden trim, bay or round-arched windows, and overhanging eaves with exposed rafter ends. All of the dwellings are sited to allow an unobstructed view of the harbor and many have wide wrap-around porches. The majority of the dwellings have remained relatively unaltered and retain a high degree of architectural integrity.

The two buildings and the town park within the East Shore Road Historic District date from the early twentieth century and illustrate the neighborhood's continued growth and the influence of Huntington's popularity as a summer resort and attractive suburb. Built in 1916, the Roger's Garage and Servants' Quarters, the only surviving element of a large turn-of-the-century estate, retains many of its distinctive picturesque details including multi-pane sash, overhanging eaves, molded fascia board, and massive wooden brackets. The John C. Ingersoll House, built in 1926, is an example of the Colonial Revival style of architecture popular in the early twentieth century. The spacious two-story dwelling features multi-pane sash, end chimneys, shingle sheathing, and a Palladian gable window. Larger and more distinguished than its surrounding late nineteenth century counterparts, the Ingersoll House is nonetheless a much more modest example of the style than the stylish, rambling mansions that were built throughout Huntington Bay in the early twentieth century. The Halesite Town Park, situated at the southern end of the East Shore Road Historic District was established in the 1920s and, as a result of its dramatic waterfront location, makes an important contribution to the East Shore Road Historic District's historic turn-of-the-century (1900) appearance. Noteworthy features include a broad open lawn, mature plantings and twin (street side) entry pavilions. These pavilions are open and have shingled supports and hip roofs.

The East Shore Road Historic District is located in the area of Huntington known as Halesite along the east bank of Huntington Harbor in the center of the East Neck Peninsula. Halesite was one of the few areas in East Neck that was developed early in Huntington's history due to its waterfront, abundant natural resources, and shipbuilding activities. One of the area's first industries was a pottery works established in the mid-eighteenth century. The pottery works was run by a succession of entrepreneurs, the most prominent of which were the Brown Brothers, who operated it from 1863 until 1904. Included within the East Shore Road Historic District, the site of the pottery works remains generally undeveloped as a town park with its archeological potential not yet investigated.

East Shore Road, the major thoroughfare along the east bank of the harbor, was laid out in 1836. The only three properties that survive dating from the early nineteenth century are Aunt Sally Scudder's House (c.1800), the George R. Johnson House (c.1830), and the William and John Jarvis House (c.1850). Although altered by additions and the application of decorative details, these dwellings still exhibit distinguishing characteristics of settlement period construction in their center or side-hall plans, shingle and clapboard sheathing, and lack of decorative detail from their original period. The dwellings are historically significant as the only surviving remnants of East Shore Road's original settlement and development in the mid-eighteenth and early nineteenth centuries.

During the mid-to-late nineteenth century when the rest of Huntington was beginning to experience prosperity as a fashionable summer resort, East Shore Road developed as a residential neighborhood primarily for the workers involved in the nearby commercial and water-related enterprises. Its growth as a working-class neighborhood instead of a residential enclave of the wealthy like many other areas in Huntington Bay was due in part to its well-established industrial base and its somewhat self-contained, isolated existence. The majority of the dwellings in the East Shore Road Historic District were built during this period (1860-1900) and exhibit the picturesque, eclectic architectural details popular during the late nineteenth century. Built for the neighborhood's working-class population, the residences are small scale, have regular fenestration, and an overall lack of ornament. As examples of late nineteenth century working-class dwellings, the residences in the East Shore Road Historic District represent an unusual collection within Huntington's three hundred year old building stock, for most of the town's buildings reflect the local conservative building tradition which dominated local construction from the mid-seventeenth to mid-nineteenth centuries. Dwellings constructed throughout the town after c.1850 were either large, middle-class homes or spacious mansions designed in the popular architectural styles of the period.

In contrast to the middle-class residences which were built at the same time along West Neck Road in the unincorporated village of Huntington (included in the West Neck Road Historic District), the dwellings along East Shore Road are much smaller, more symmetrical in form, massing and fenestration, and much less ornate. Decoration on the East Neck Road dwellings is usually limited to one or two details usually at the cornice line or on the door and window surrounds. Representative examples of the type include the Carrie E. Brown (c.1875) and Warren Sammis (c.1890) houses, which feature bargeboards, the Rogers-Yost (c.1890) and G.C. Hallock (c.1860) houses, with wraparound porches, and the O'Hara-McGuire House (c.1890), with exposed rafter ends and round-arched gable windows. As a group, the residences in the East Neck Road Historic District are significant as a small yet distinctive and relatively intact concentration of period working-class dwellings built during Huntington's period of growth and expansion in the late nineteenth century. Their small size and lack of decorative details reflect the architectural tastes and social standing of their owners and represent a blend of Huntington's persuasive conservative local building tradition and the introduction of the picturesque, eclectic details of popular late nineteenth century architectural styles.

The extensive turn-of-the-century estate development as a result of Huntington's popularity as a fashionable summer resort in the late nineteenth century affected most areas of the town but left East Shore Road virtually unaltered with the exception of the construction of the Roger's Estate c.1905 and the creation of the park in the pottery works site. The only surviving element of the estate (demolished in the mid-twentieth century) is the Garage and Servants' Quarters, built in 1916. Although altered, the building retains its eclectic, picturesque details and remains historically significant for recalling an aspect in the area's residential development. The final phase of period residential development in the East Shore Road Historic District is represented by the John C. Ingersoll House. Built in 1926, the spacious dwelling is a modest example of the Colonial Revival style of architecture. With its shingle sheathing, end chimneys, and multi-pane sash, the dwelling recalls Huntington's conservative settlement period architecture and recalls the most recent phase of period residential architecture within the district. In addition, the Halesite Town Park was established in the 1920s and reflects the town's early twentieth century resort and suburban development. With its scenic waterfront setting, open lawn and mature trees, and shingled entry pavilions, Halesite Park makes a significant contribution to the East Shore Road Historic District's overall historic appearance.

The East Shore Road Historic District remains historically and architecturally significant within the multiple resource area as a small, largely intact working-class neighborhood established in the late nineteenth century and for illustrating the building practices form the early nineteenth to early twentieth centuries.