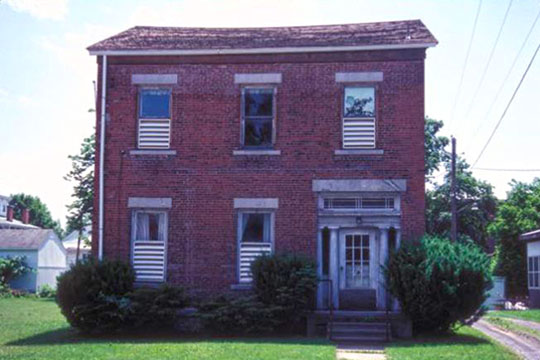 The M'Clintock House (14 East Williams Street) was listed on the National Register of Historic Places in 1996. Portions of the content on this web page were adapted from a copy of the original nomination document. [1]

The M'Clintock House/Baptist Parsonage is located in a Federal style neighborhood, surrounded by buildings of similar age, construction and spatial quality. Small and delicate in scale, some notable features of the M'Clintock House include a beautiful front door with columns and sidelights and fans in the gables.

The M'Clintock House was owned by Richard P. Hunt, a Quaker from Waterloo, and rented by Quaker pharmacist Thomas M'Clintock and his wife, Mary Ann M'Clintock. It was in this home on July 16, 1848, that the Declaration of Sentiments, resolutions and speeches were drawn up for the subsequent First Women's Rights Convention, held July 19 and 20, 1848 in Seneca Falls, New York. Mrs. McClintock was invited to the initial planning session of the Convention, held at the Hunt House in Waterloo. Both Mr. and Mrs. M'Clintock attended the Convention; Mary Ann was appointed Secretary of the two-day meeting, and both signed the Declaration of Sentiments. The house is a delicate, elegant example of the Federal style interpretation in Upstate New York.