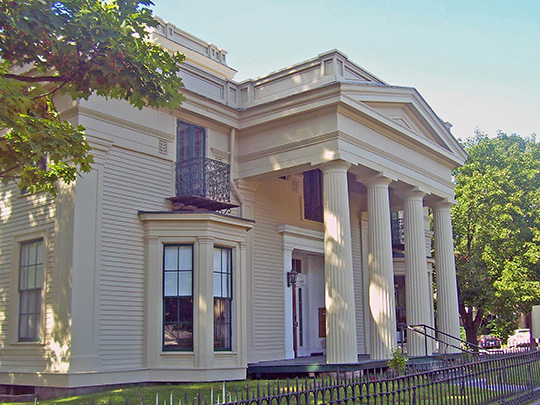 The Marvin-Sackett-Todd House (also known as the Hiram Charles Todd House; 4 Franklin Square) was listed on the National Register of Historic Places in 1972. Portions of the content on this web page were adapted from a copy of the original nomination document. [1]

The layout of the house is a square central block facing east on Franklin Street with a T-shaped wing behind. There are two stories and over the central block a cupola. There are three bays across the front (east) facade and three bays along the Division Street (north) facade of the main part. On the north side of the wing there are seven bays.

Behind the clapboard exterior the walls have thick wooden frames with diagonal braces filled with bricks. Greek Revival details include a wide entablature reaching midway down the second story windows and fretwork on either side of the three front upstairs windows. A parapet runs around the flat roof of the main part of the house. Only the rectangular end of the T-shaped wing has a gable roof. This roof terminates in a pediment on the north (Division Street) pilastered facade.

There are five porches. On the front (east) side there is a full height pedimented portico. Two smaller one-story porches flank the house on the north (Division Street) side. The first, centered on the main block, is an enclosed porch with four Doric columns and a hip roof. The second, a smaller pedimented porch with two Doric columns dating from the 1940's, is on the north side of the wing. On the west side there is a small upstairs porch and a large enclosed porch to the south leading out to the garden. This porch was enlarged by the Todds in 1928.

The house has six interior chimneys. Two are located on the north and south sides of the square central block. On the long section of the wing are the other two chimneys.

The interior has several notable features. The wide central hall leads to a double staircase which curves and then converges into a single staircase when it doubles back on a semi-circular landing.

In the 1930's, the central hall was wallpapered with adaptations of Currier and Ives prints of Saratoga Springs including one showing the house in the background of the railroad station. In 1928, the original floor covering of stenciled canvas was found under the carpet in the hall.

At the northeast corner of the house is the library with its own porch and entrance on Division Street suggesting that Thomas Marvin originally planned it as an office.

On the south side of the house, the spacious drawing room runs the length of the main part of the house. A graceful semi-elliptical arch divides the space into a front and rear parlor each with its own handsome marble fireplaces. A full-length bay window at the front (east) end looks out onto the street. This window and a comparable one in the library on the other side of the main portico were added a few years after the house was built. At the same time the Marvins bought the Belter furniture (now preserved in the Saratoga Historical Museum). At the west (rear) end of the living room two French doors lead out onto a semi-octagonal music room.

The alterations have been only very minor. The south porch was enlarged about 1928, and the north entrance porch on the wing was added in the 1940's. At the same time, the windows were lengthened cutting into the cornice.

The significance of the Marvin-Sackett-Todd House lies in its place in 19th century social history, its key location to Saratoga Springs as a part of a 19th century village square, and its fine Greek Revival design and details.

Historically, this house represents the simultaneous arrival of wealth and a new architectural style in Saratoga Springs. The blossoming of Saratoga Springs as a summer "watering-place" in the 1820's and the 30's coincided with the popularization of Greek Revival architecture. To accommodate the new influx of summer visitors huge hotels were constructed, the most famous being the United States. The Marvin-Sackett-Todd House was closely associated with the success of the United States Hotel. It was built by Thomas Marvin, nephew of the original owner of the hotel and later its joint proprietor with his brother. The exact date of the building of this substantial Greek Revival house is unknown, but it was possibly 1837, the year of Thomas Marvin's marriage. The house was built on Marvin Square (later renamed Franklin Square) onto which the family enterprise, the United States Hotel, backed. At about the time of the building of the house, Marvin heard of the proposed railroad link from Ballston Spa to Saratoga Springs which was completed in 1833. The Marvin family sold a piece of land on the square to bring the trains right into the center of town and practically to the doorstep of their hotel. The Greek Revival station stood on Marvin Square only yards from the Marvin-Sackett-Todd House. (This station burned in 1871 and its replacement has since been demolished.) The imposing Marvin house was always a focal point on the square, and for over 100 years it remained in the hands of this locally prominent family and close friends. Marvin, besides owning the United States Hotel, was a judge, bank manager, and President of the village of Saratoga. William Sackett, his son-in-law, served at one time as a member of Congress from Seneca and Wayne Counties. The Todds, great friends of Mrs. Sackett, inherited the house in 1927. Hiram Charles Todd, a native Saratogian, was by this time a well-known New York lawyer. He conducted an extensive Tammany Hall graft investigation in 1930 during which time his family lived in the house at Saratoga Springs.

The Marvin-Sackett-Todd House is a crucial part of a whole. It stands on one of the most important and centrally located sites in Saratoga, the pivotal point of a striking 19th century composition on Franklin Square. Its temple front is echoed in the facades of two more Greek Revival neighboring houses, and two grand Victorian structures look out on the square. Since so much that is reminiscent of Saratoga's "gilded age" has disappeared, this square is of exceptional historic and architectural importance.

In addition, this house is outstanding in its own right. The overwhelming, dignity, restraint and monumentality of the house are outward vestiges of an extremely expensive construction. Remarkably untouched by 20th century alterations, the house is a mid-19th century period piece with its octagonal music room, its interior arch dividing the long living room, and its double staircase. Due to its over-all scale, quality, and design, this house ranks among the most important examples of Greek Revival domestic architecture.