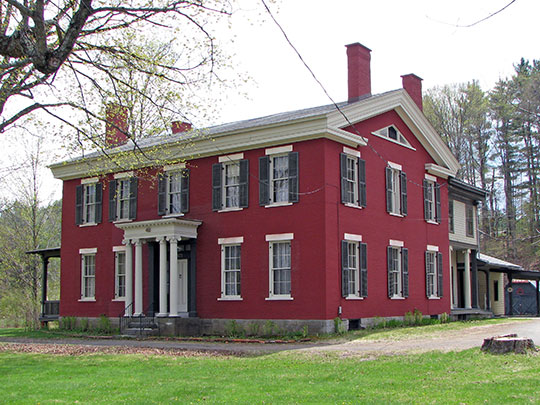 The Hand-Hale Historic District was listed on the National Register of Historic Places in 1979. Portions of the content on this web page were adapted from a copy of the original nomination document. [1]

Structures contributing to the character of the Hand-Hale Historic District

Hand Law Office - Built before 1830, the original modest, one-story frame structure was enlarged by addition of a one-story brick wing in 1865. An early Adirondack structure with Greek Revival style exterior features, the office also retains a remarkable mid-nineteenth century interior which includes original soapstone wood stoves for heating, the walk-in vault for records storage, and the Hand law library in tall bookcases lining the office walls. The building remains in use as a law office.

Site of First Hand Residence - Pictorial evidence from about 1850 indicates that a one and one-half story frame residence originally stood southeast of the law office. This house was built prior to A.C. Hand's arrival at Elizabethtown in 1831, and was the first house occupied by his family. This structure remained on the property until after construction of the brick house in 1849. Moved to a location 200 yards west of its original site at an undetermined date, the frame house continues in use as a private residence with considerable alteration. Presumably, archeological evidence associated with the use of the property may exist at the original site, though no systematic subsurface examination has occurred.

Hand House - An elegantly formal two-story, brick Greek Revival style residence, the second Hand House was built in 1849. An attached kitchen wing with servants' quarters above extends at the rear, connecting with a shed which may have been a dependency of the first residence. Extensive original fabric remains on the interior, including moldings, paneled doors, and door and window architraves.

During the period 1870-1890, numerous alterations to the exterior and interior occurred as the house was partially remodeled. Among the features added during this period were a porte cochere at the principal entrance (later removed); a porch and extension of the second story sheathed in scalloped wood shingles on the southeast side of the house; a redesigned main staircase with stained glass clerestory, and a library alcove added as an extension of the southeast rear parlor.

The porte cochere was removed during a final wave of alteration which occurred between 1924 and 1927, and a portico based upon the original was reconstructed in its place. The Hand House is being adaptively used in part for offices, with no changes to its existing historic fabric. Hand family furnishings have been extensively used in the adaptive use scheme.

Garage — An interesting dependency built during the early twentieth century to replace a burned carriage house, the garage is sheathed in narrow clapboards and shingles and covered by a metal jerkinhead roof.

Hale House — A rambling, two-story frame residence sheathed in clapboard, the Hale House was built in 1814 and greatly modified during the period 1850-1870. The present appearance is that of a simple but picturesque dwelling which embodies a variety of stylistic elements. Significant features include a broad porch with lattice posts across the principal (south) elevation, bay windows on the west side, and a large carriage and wood shed attached to the east side of the residence. The house retains considerable interior detail, including moldings and mantels, and it is presently occupied as a private residence.

Hale Barn Complex — Built about 1850, the agricultural complex on the Hale estate includes a large gable-roofed, timber-framed barn incorporating a caretaker's office, a tool shed, a corn crib, and a spring house/creamery built into a natural earthen bank.

Caretaker's Cottage — A narrow, one and one-half story frame dwelling covered by a steep-pitched gable roof, the cottage is sheathed in clapboard and decorated with lattice porch trim identical to that of the Hale House and Law Office. The cottage appears to date from about 1870.

The Hand-Hale Historic District was listed on the National Register of Historic Places in 1979. Portions of the content on this web page were adapted from a copy of the original nomination document. [1]

The Hand-Hale Historic District is an important historic and architectural resource which depicts the cultured, sophisticated lifestyle of two prominent families of New York State jurists in the Adirondack wilderness during the nineteenth century. The Hand-Hale Historic District encompasses two adjoining homesteads and law offices reflecting the tastes and talents of Augustus C. Hand and Robert S. Hale, attorneys whose reputations and influence extended far beyond Essex County. The formal Greek Revival-style Hand complex and the romantic, eclectic Hale estate buildings survive remarkable intact to illustrate an extraordinary aspect of Adirondack life. The Hand Law Office still houses an active law practice, and this continuity of use further contributes to the significance of the district.

Augustus Cincinnatus Hand (1803-1878) arrived at Elizabethtown from his native Vermont in 1831, establishing his first law practice in the two-room frame office on River Street. Hand's busy practice at the Essex County seat prospered, and his reputation for fairness and honesty won him clients throughout the Adirondack region. A.C. Hand was elected to Congress in 1839, and to the state Senate in 1845, a reflection of the esteem with which his Whig neighbors regarded the lifelong Democrat. Appointed a justice of the New York Supreme Court in 1848, Hand built an imposing Greek Revival style brick residence the following year, a house more in keeping with his stature than the modest frame dwelling in which his family lived for eighteen years. Judge Hand's legal career culminated in his appointment to the state's highest bench, the Court of Appeals, in 1855. Throughout his legal career, Hand maintained his home in Elizabethtown, practicing law from his original office nearby.

The Hand legal dynasty became perhaps the most notable family in the history of American jurisprudence, numbering fifteen jurists in five generations. A.C. Hand's three sons, Clifford (1831-1901), Samuel (1833-1886), and Richard (1839-1914) all became prominent attorneys. Samuel Hand served on the State Court of Appeals and as first president of the New York State Bar Association in 1878. Richard L. Hand joined his father in partnership at Elizabethtown and resided with his own family in the homestead. He held numerous civic offices, and was elected president of the State Bar Association in 1904.

A.C. Hand's grandsons, Augustus Noble Hand (1869-1954) and Learned Hand (1872-1961) likewise became notable jurists, serving remarkable parallel legal careers as lawyers; as justices of the U.S. District Court, Southern District, New York; and on the influential U.S. Court of Appeals, Second Circuit. During their total of eighty-one years on the federal bench, the two Hand cousins rendered more than 5,000 opinions, and came to be regarded as the greatest jurists of their day. Augustus Noble Hand was born and raised at Elizabethtown, and spent many summers there during his adult life.

The life of the Hand family became intertwined with that of the Hale family in 1844, when Robert Safford Hale (1822-1881) began to read law in the office of A.C. Hand. A native Vermonter like his mentor, Hale also achieved prominence in the legal profession. Admitted to the bar in 1847, Hale established his home and practice adjacent to the Hand Property, where he built his office and renovated an existing dwelling into a rambling, eclectic gentleman's country house. Matthew Hale, a brother, later married a daughter of A.C. Hand. Robert S. Hale's legal career included a term as Essex County judge and surrogate (1856); he served as a Presidential elector in 1860; fulfilled the unexpired Congressional term of his law partner, Orlando Kellog (1865); and later served in Congress from 1876 to his death in 1881.

The Hale estate, with its complete law office, its complement of farm buildings, and its picturesque setting intact, is an important element in an Hand-Hale Historic District which illustrates the practice of law on the Adirondack frontier during the nineteenth century. Both the Hand and Hale properties are presently held by owners sensitive to preservation of their historic and architectural integrity.