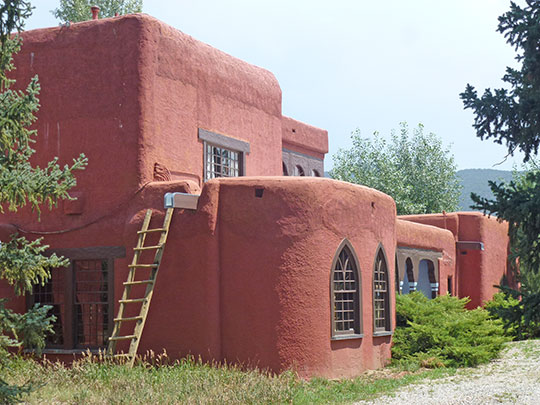 In 1912, New Mexico was admitted to the Union as a state. Fundamental differences between the US and Spanish and Mexican governments would greatly influence the future of the area. The US Constitution, based strongly in private property rights, did not recognize the communal nature of the Spanish and Mexican land grants. In the end, many land grants were lost, decreased in size, ceded partially or wholly to the federal government, swindled away by corrupt lawyers and politicians, or broken up among individual heirs. While the US government confirmed most land grants of the Taos Valley, thousands of acres were not recognized, and in many cases, were ceded to the Carson National Forest, established in 1908. In recent years, land grants have suffered further land loss through sales to non-heirs. Pueblo land grants also have suffered land loss and undergone much litigation about their status. In 1864, President Lincoln signed Taos Pueblo's land patent, but various court rulings left the fate of Pueblo lands in question for decades. The Pueblo is now considered a formal US Indian reservation and is protected as such. However, the land afforded to both land grant heirs and Pueblo Indians is in most cases inadequate to support the land-based economy of old.

The reduced size of the land holdings and the introduction of the US monetary system greatly altered the economy of the Taos Valley. Since American occupation, Taos Hispanos and Pueblos have found it increasingly necessary to supplement family farming and livestock raising with other employment. At the turn of the nineteenth century, many Taos residents worked as migrant labor for large agribusiness operations and the railroads or as sheep sharecroppers (partidarios). But in the early 1930's, the Great Depression limited the availability of these jobs. Many Taos citizens were shocked to find that they could not fall back upon the traditional agro-pastoral economy. Grazing and agricultural lands had been so reduced that a life of subsistence farming and local trade was simply not feasible. Residents thus became dependent on government employment projects, such as the Works Projects Administration (WPA). Today, the area receives a significant amount of transfer payment income from welfare and other public assistance and entitlement programs, including Social Security.

The history of Taos is a story of change, adaptation, and the interaction of three cultures that both complicates and enriches the reality in which its citizens live today. The most striking feature of Taos, its impressive and nourishing landscape, remains reassuringly stable in a sea of great change. It continues to attract people from far and wide, just as it attracted its earliest settlers some 8,000 years ago. Through the richness of its history, Taos looks forward to a new millennium that will build upon the opportunities provided by this beautiful land and its diverse and dedicated people. [1]