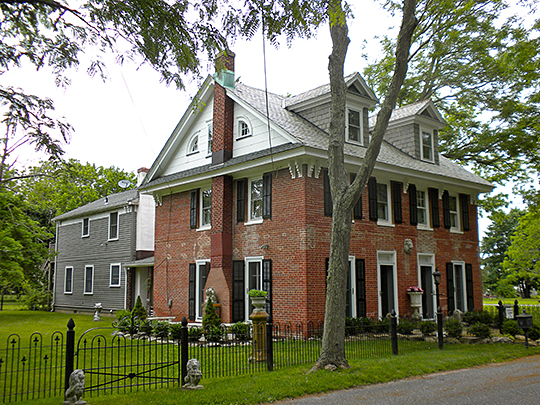 The Marshallville Historic District was listed on the National Register of Historic Places in 1989. Portions of the content on this web page were adapted from a copy of the original nomination document. [‡] .

Marshallville, one of the earliest glass-making villages in New Jersey, was the earliest and is the best preserved glass-making center in Cape May County. Bottles and window glass were made here from 1814 until just before the Civil War in a glassworks that is thought to have left extensive archeological remains. This operation was a significant unit in a major southern New Jersey industry that has been for nearly two centuries, and continues to be, an important element in the regional economy. Many of the surviving buildings and other vacant properties in Marshallville were associated with the glass industry. The Randall Marshall House was built in 1820 and combined the functions of residence and glass company office. In addition, from an extensive survey that inventoried eighty-eight glass-making sites in southern New Jersey, Marshallville was one of eight sites judged to be eligible for the New Jersey and National Registers of Historic Places (Pettifor. Archaeological Survey of Historical Glasshouses in Southern New Jersey, 1984). The Marshallville Historic District meets National Register criterion for its association with the evolution of the glass-making industry.

Marshallville was founded as a glass-making village, becoming the earliest "glass town" in the Great Egg Harbor watershed. In 1811, Randall Marshall and his son-in-law, Frederick Stanger, of Port Elizabeth, who became important figures in the southern New Jersey glass industry, bought a large tract of land in Cumberland County and Cape May County, and along Mill Creek, which flows into the Tuckahoe River. In 1814, they purchased 450 adjoining acres and established the Cumberland Glass Works, later known as the Marshallville Glass Works. The glass works manufactured window glass, employing the cylinder method, and produced glass bottles. The village was built around the glass house, which was near the mouth of Mill Creek. Favorably sited near silica sand used for making glass, ample woodlands for fuel, and a navigable waterway for marketing, Marshallville became a small glass manufacturing village that developed a symbiotic relationship with ship building and marine transport. Although wharf remains are the only visible evidence of this operation, the Stille House was the home of a shipbuilder, and the Captain Belford Smith House was the home of a ship captain. The types and numbers of ships built in the area are not fully understood, but a partial list of identified vessels includes the Ann M. (1828, possibly built in Tuckahoe), the R.L. Loper (1859), the W.R. Van Gilder (1862), and the Jennie (1887).

Marshallville was a thriving community during the heyday of glassmaking. Thomas Gordon described it in 1834: "Marshallville, or Cumberland Works, contains from 30 to 40 houses, some extensive glass works belonging to Randall Marshall, Esq., at which much glass is manufactured, one tavern, and two stores. There is much shipbuilding carried on here on vessels of from 50 to 100 tons; soil sandy."

A map produced in 1862 shows four glass houses, a tavern, and over forty houses. The village also included two stores.

Marshall's enterprise included the construction of the village. He built small houses for his workmen, a store and a school. There seems to be no record of the early workers, but Company books that have survived from later years mention workers and customers. Two families that lived and worked there, the Hanns and the Wheatons, still have descendants living in southern New Jersey. The village schoolhouse was also used for Methodist religious meetings, though the Head-of-the-River Methodist Church (listed in the National Register) was near enough so that residents could travel there. Marshalls, Stilles, Burleys and Garretts — local families some of whose members were probably Marshallville residents — are buried in the Head-of-the-River Cemetery.

Randall Marshall built a home for Frederick and Ann Marshall Stanger. This house was built near the factory where Frederick blew glass and acted as overseer. Randall, however, continued to live in Port Elizabeth and travel by horse to oversee the progress of his development. On these trips, he always visited his daughter Ann, who already had one daughter of her own and was expecting a second child. However, Ann, who was only twenty years old, died in 1815, a few days after the birth of her second child, a girl also named Ann. This Ann Stanger later married Franklin D. Edmunds. The Stanger house no longer exists.

The Thomas Chew Marshall House was built in 1818, on the corner of the roads near the store, by Randall Marshall, for his son. It is still in the family, and is supposedly the oldest house in Marshallville. Thomas Chew Marshall, the second child of Randall and Mary Marshall, married Experience Steelman; together they reared fourteen children. He apparently moved to Marshallville to follow his trade as a glass blower, or gaffer. Two of his sons Fred and Randall, learned to cut glass in the factory. His oldest son, Henry, was a gaffer. Thomas and Experience lived in this house the remainder of their lives.

The Mary Marshall Seeley House was a two and one-half story frame dwelling, built in 1823 by Randall Marshall for his fifth child, Mary. The house no longer exists. Mary Marshall married Ebineezer Seeley in 1823. The Seeleys lived in Marshallville the remainder of their lives, and raised seven children. Their youngest child, Thomas Seeley, married Lydia Godfrey. They lived in his parent's home until Thomas' death.

The Dr. Randolph Marshall House was built on land below Mill Creek, on the river side of the road, in 1834, by Randall Marshall. Randolph was the youngest son of Randall and Mary Marshall. He attended the School of Pharmacy in Philadelphia, and was to start his practice in Marshallville. In 1835, he married Sarah Hughes.

When Randall Marshall was nearly seventy years old, he evidently decided to build a brick house in Marshallville for himself, his wife Mary, and their daughter Hannah, who never married, so that they could live near his glassworks and his other children. This house was completed between 1820-1840, but Marshall apparently never carried out his intention. When he died in 1841, he still resided at Port Elizabeth and he was buried in the Quaker cemetery there. His widow and daughter then moved to the new house in Marshallville. Mary lived there for six years, dying intestate in 1847.

After Randall's and Mary's deaths, the Marshall estate was broken up among their heirs. Thomas Chew Marshall bought his house and more than 100 adjoining acres. His sister, Mary Seeley, bought her section and Dr. Randolph Marshall bought his share, including his brick house.

The Stille House was built in 1836, by or for John Stille, on the site of the former Samuel Stille House. The Stilles were shipbuilders, and one was a partner in the Marshall-Stille Company, which operated a general store for Marshallville. (Caret Garrett, a writer of prominence, owned the Stille House from 1925 until his death in 1954. He was a financial writer for the New York Sun, the New York Times, and the Wall Street Journal. He was Editorial writer-in-chief of the Saturday Evening Post, and the author of several books. During his ownership, the property was called Yellow Hill Farm. Prior to Garrett, the property was owned by a family named Burley.)

Although several generally unobtrusive newer houses have been built, Marshallville appears to have been fortunate in the re-routing of Route 49, diverting traffic away from the village. The main street is now a lightly traveled road, carried over Mill Creek by a steel trussed bridge, built in 1901. This bridge replaced a covered bridge built in 1841. Plans are currently [1989] underway to replace the present structure.

The colonial reproduction house built by Garet Garrett in 1941 (Garrett also owned the Stille House) is of interest because Garrett built the house for use as a studio for himself, and did much of his writing there. Of further interest, this house was sold to Dr. Alison Price, who developed the nationally known antacid, Maalox.

Lee, Francis Bazely. Genealogical and Memorial History of the State of New Jersey, 1885.

Deeds of Joseph Falkenburg to Randall Marshall and Frederick Stanger. 1811, 1814.

Interview with Margaret A. Folger, owner of the Thomas Chew Marshall House, and a fifth generation descendant of Randall Marshall, who built the glassworks. Feb. 1985.

Tombstones in graveyards of Head of the River and Tuckahoe Methodist Churches and Port Elizabeth Quaker meeting.