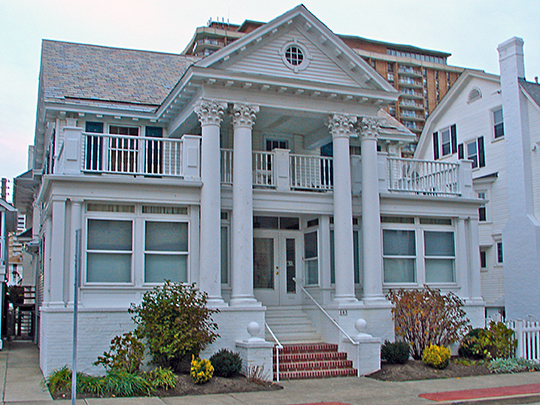 The John Stafford Historic District was listed on the National Register of Historic Places in 1988. Portions of the content on this web page were adapted from a copy of the original nomination document. [‡] .

In the beginning of the twentieth century, Ventnor was about to explode from a developer's dream into a fully blown seaside automobile suburb. Where Atlantic City had relied on the train to concentrate guests in downtown hotels, Ventnor was connected by the Black Horse Pike to Philadelphia, and provided up-scale houses in a planned automobile suburb to attract the driving public. The result was a new form of resort, one which anticipated Miami Beach as well as much of the remainder of the twentieth century New Jersey seashore development in its low density and wide streets. Although much of Ventnor is a unified development, certain districts have particular interest; among the earliest areas to develop, and one which retains its identity owing to a chance isolation created by its being bracketed by modern high rise apartments is the zone associated with Philadelphia developer John Stafford. It was Stafford who hired Philadelphia architect Frank Seeburger to design the buildings that established the area's character. Occurring simultaneously with Ventnor's principal growth, the John Stafford Historic District affords a microcosm of the resort's heyday, and represents a pattern of development of significance in resort history.

The growth of Ventnor is apparent in the changes in the atlases of the city between 1896 and 1914. In 1896 there were no more than a handful of cottages between Madison Avenue and Atlantic City, and indeed it was not until 1903 that Ventnor was incorporated. By 1914, almost every square showed some development from the Atlantic Ocean to the rear Thoroughfare as the rear channel was called. This is corroborated by published data on the growth of the village from fewer than 100 houses in 1910 to nearly 1,300 in 1917. It was in those same years, that New Yorkers Carrere and Hastings, best remembered for their design of the New York Public Library and for the early concrete hotels at St. Augustine, Florida, were asked to provide a plan for the new city. Published in the 1907-8 T-Square Club Catalogue, it shows a City Beautiful arrangement of broad boulevards and cross axes. Subsequently carried out, the plan is still reflected in the street pattern and by its connection to Atlantic City at the World War I monument, designed by the same architects in 1922. With such stimuli and the growth of the highway networks it was no surprise that Ventnor would become so fashionable, attracting Wanamakers and film makers to cottages that were valued in the tens of thousands of dollars. In the 1920s, newspaper accounts of real estate prices were extraordinary. Houses that had sold before World War I for "$13,500 to $15,000 are now reselling at prices ranging from $40,000 to $65,000, while beach front lots were quoted at $25,000 to $40,000." This was accounted for by the proximity to "the greatest resort in the world," but also by the city's "wise restrictions and zoning plan" making it a distinctive monumental planned resort neighborhood.

The John Stafford Historic District conformed to the planned character of the community, with building set backs, investment requirements, and nuisances and uses controlled in the manner of modern zoning. It is of special note both for its developer, and his chosen architect, Frank Seeburger (c.1880-1934). As noted earlier, John Stafford was a well-known Philadelphia businessman who at the end of the nineteenth century and the first years of this century, commissioned Horace Trumbauer to design the St. James Hotel on Walnut Street in Philadelphia, and who was active in the development of North Philadelphia real estate. It was probably that connection that caused him to retain Frank Seeburger who had been in the Trumbauer office, and had-then gone out on his own, designing houses in other resorts including Cape May. In Ventnor he designed the handsome, broadly proportioned Colonial Revival houses that made him such an asset in the Trumbauer office. These give visual unity to the district and help establish its pleasant character.

Of even greater interest are some of the early residents who commissioned houses here. Their names are familiar to the student of Atlantic City's hotel trade, for at least four of the properties were owned by members of the Josiah White family, owners of the Marlborough and Blenheim hotels, while another was owned by A.C. Buzby (108 South Baton Rouge Avenue), whose family owned the Dennis, adjacent to the Blenheim. The 1914 Philadelphia Real Estate Record and Builder's Guide lists two houses by Philadelphia architect J. Fletcher Street, formerly of the office of Price and McLanahan, architects of the Marlborough and Blenheim hotels, one of which was specifically noted as being for the White family, while the other was listed as "owner's name withheld." Both were of hollow tile and concrete, the chosen materials of the office, and are probably the buildings on Vassar Square.

The house for A.C. Buzby also was listed in the Philadelphia Real Estate Record but was designed by an Atlantic City architect, Bertram Ireland (fl. 1900-1930), who was active in the early twentieth century and designed a number of the high-style buildings in his resort. That house is also in the Colonial Revival style so popular in Ventnor. The proximity of these houses for the hotel operators of Atlantic City, while still being out of the city, probably indicates the pressures of operating a major resort hotel. On the other hand, the character of the architects working in this zone of Ventnor seems to typify the community and most of the later seashore suburbs — young architects, who either have an earlier contact with the client for a parent office — or a local architect.