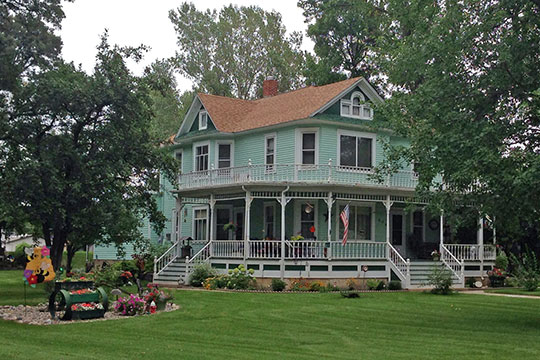 Minot is still young and growing, although past its fiftieth birthday. Its name (pronounced MY-not) was given it to honor Henry D. Minot, young Eastern capitalist and college friend of Theodore Roosevelt. Situated in the deep valley of the Souris (Mouse) River, the town overflows the level mile-wide flood plain to thrust itself up the south slope of the valley onto the open prairie. Rough, well worn block pavement in the business section evolves into smooth, tree-bowered asphalt avenues lined with fine homes in the residential districts. The twisting, sluggish river winds through the center of the city, in some sections its banks scarred with piles of refuse, in others rimmed by trim lawns.

The hills that rim the Souris at Minot are evidences of the mighty force of the raging waters that during the glacial period poured from the melting edge of the great Dakota ice sheet to plow deep valleys and lay the basis for the town's future prosperity. The products of the geological past yield valuable returns. One, the rich, fertile bed of glacial Lake Souris, provides good crops. The other is lignite, the soft brown peat-like coal that underlies much of the northwestern portion of the State, and for which Minot is an important shipping point.

James J. Hill's Great Northern Railway was pushing west through Dakota Territory in 1887 when it was found necessary to stop near here and build a bridge across a coulee. Where construction halted there immediately sprang up a large tent town, which was generally assumed to be the start of a permanent settlement. The railroad company, however, had selected a town site to the east, on the Souris River, and when this became known the exodus was sudden and complete; almost overnight the tent town was transplanted to the new location. This mushroom-like appearance, coupled with an almost phenomenal growth to 5,000 population during its first year, earned the new frontier settlement the title of the Magic City.

The first white man to settle on the ground now incorporated into the city of Minot was Erik Ramstad, who in May 1885 had come from Grafton, North Dakota, and settled by squatter's right on a quarter section bisected by the Souris. Late in the summer of 1886 he relinquished 40 acres south of the river to the town site people, and this land together with another 40 acres to the south became the original site of Minot. On July 16, 1887, less than a year after settlement, Minot was an incorporated city. A few weeks later an entire slate of city officers was selected in a campaign which set a high standard for many heated city elections of later years. Principal interest centered about the candidates for mayor, and with typical frontier camaraderie the defeated man was the first to sign the bond of office for his victorious opponent. At its initial meeting the newly elected city council selected as the city's first police chief William Flumerfelt, a saloon-keeper.

When Minot's first Christmas arrived, in 1887, not a church graced the town. To observe the season a Christmas tree was set up in Jack Doyle's saloon, which stood on the site of the present Woolworth store at the corner of Central Avenue and Main Street. Most of the town turned out for the celebration, gifts were hung on the tree, and everyone was given candy.

Many early residents were buried in a cemetery in southwest Minot, although no markers remain. This burial place on one occasion almost saw the interment of a person who, by virtue of being very much alive, was quite undeserving of inclusion here. It happened that a local character known as Spider had gone to his reward, and "the boys" had taken over his obsequies, stopping on the way to the cemetery to fortify themselves at a saloon. Reaching the grave, they attempted to lower the coffin, but one end dropped down and the other caught on the side of the grave.

John J. Powers, a well-known rancher, was selected to straighten the coffin, but in getting down he was caught between it and the wall of the grave. Disregarding his protests, the high-spirited pallbearers proceeded to shovel in dirt, and he was covered except for his head and shoulders when passersby, hearing his cries, arrived on the scene and effected a rescue.

It was events like this that earned Minot the name of a wild town; and, considering the type of people who flocked into the new city-transient railroad workers and hangers-on, horse and cattle thieves who at that time infested the west and northwest sections of the State, gamblers who saw opportunity in the new settlement, and criminals who had escaped across the boundary from Canada—it is hardly remarkable that the town soon had a reputation for lawlessness and iniquity. Many pioneer residents of Minot still remember a certain railway passenger conductor who would call the name of the station, "MINOT, this is M-I-N-O-T, end of the line. Prepare to meet your God!"

In spite of the disreputable element, many dependable citizens selected the boom town for their permanent homes, and to them the development of the city has been due. As early as 1887 Marshall McClure was publishing the first newspaper, the weekly Minot Rustler-Tribune. The city had its first wooden sidewalk in 1888, and the same year Main Street was lighted with kerosene lamps. The city council passed an ordinance against speeding with horses, the limit being set at eight miles per hour. Apparently the council of that day believed that actions speak louder than words, for on one occasion it adjourned to go out in a body to grub stumps and fix a road that needed repair. In 1889 this same progressive body voted that the city pay 50 cents per barrel for the first 10 barrels of water delivered at any fire in the city. The first fire wagon was John Strommen's dray, which was used to haul water every time an alarm was turned in.

Burlington, the first community in the Souris region, had confidently expected that the Great Northern would be routed past its door, but instead the road chose the Minot site. The Magic City thereupon set out to deprive its rival of the county seat as well. Arrangements were made for the railroad company to sidetrack an old freight car at Lonetree 28 miles west of Minot. Telegraph wires were strung into it, and the road master presented an affidavit to the county commissioners stating that a station had been opened. Burlington protested: Lonetree belonged in the Burlington precinct, it claimed, and there were not enough residents to open the polls. The railroad installed two operators, a station agent and a helper; Lonetree was declared a precinct, and it is said that railroad crews as far west as Glasgow, Montana voted. Minot became the county seat.

Settlers rushed into "Imperial Ward" County when it was surveyed and opened to homesteading in 1896. The origin of the county's nickname is apparent from the following description in Colonel Lounsberry's Record: "... a small sized empire of 5,000 square miles rich in soil, clays, coal, and the energy of its people, immigration unequaled, steady and firm like the flow of a river." Land entries at Minot during the first nine months of 1905 were said to be greater than at any other U. S. land office in the country. Homesteaders slept on the floor of the office to avoid losing their turn in filing for land. Imperial Ward remained intact until 1910, when its ample acres were carved into Renville, Burke, Mountrail, and present Ward Counties.

Deer, antelope, prairie and timber wolves, foxes, mink, otter, beaver, ducks, and geese provided early settlers of the Minot area with food, furs, and sport. In the winter, when water holes were opened in the frozen river for stock, fish would come up to the openings in such numbers that they could easily be speared with pitchforks, and it was not uncommon at these watering places to see fish frozen and stacked up like cordwood.

Since the Souris winds through Minot for a distance of eight miles, its overflow can cause great damage, and several times there have been severe floods. The worst occurred in 1882, 1904, 1916, 1923, and 1927. The 1904 flood took the town by surprise, as there were no telephones in the territory upstream from Minot by which the alarm could be given, and small houses were torn from their foundations as the crest of the flood hit the city. Railroad tracks were under water and traffic on the Great Northern and Soo was at a standstill. The flood continued for about three weeks, and children rejoiced as school was discontinued. People went about their business in boats, using their front porches for piers. Many north side residents moved in with friends living on the higher south side.

In recent years dikes have been built to keep the Souris within bounds, and Federal works on the river above the city, the subsistence homestead project at Burlington, and the Upper Souris migratory waterfowl project have constructed dams which enable engineers to control the flow of water.

While the Great Northern was responsible for Minot's origin and early growth, several factors have shared in the city's later development. Extension of the railroad westward added to the trade territory, all of which is agricultural, and the city became the logical wholesale distribution point for northwest North Dakota. The arrival of the Soo in 1893 tapped untouched areas southeast and northwest, again enlarging the trade region. The first bus line in the State began operation between Minot and Bismarck in 1922. Truck and bus lines now radiate from Minot to serve the many outlying communities not on the transcontinental railroads. The city is a center for an area of 22,500 square miles, extending north to the Canadian line and west into Montana. In 1930 Minot had the second largest volume of wholesale business in the State, with transactions totaling $18,500,000.

Its location in an extensive agricultural area has established Minot as a farm market. During both pre-war and post-war periods of heavy crop yields and high prices, Minot boomed as a grain shipping point. Two flour mills have been a factor in maintaining cash grain prices at higher levels than in other communities. Processing of dairy and poultry products has become an important industry, and a cash livestock market has brought additional returns and marketing facilities in the past few years. A plant of the poultry cooperative maintained by the North Dakota Farmers Union is situated in Minot. The recent droughts lessened grain marketing, but pushed forward in another direction the production and stability of diversified farm products, as indicated by the expansion of one and the erection of another creamery and processing plant.

Like other cities, Minot has felt the depression period, but outwardly there remains only one prominent scar—"Sparrow Hotel," the steel skeleton of a 10-story hotel building. Begun in 1929, construction was halted by the market crash of that year, and the framework now houses only a multitude of twittering, chirping sparrows.

Its rail facilities have helped to make Minot a natural shipping point for the great quantities of lignite mined in this vicinity. The Truax-Traer Company, with headquarters here, is one of the largest lignite strip mining companies in the United States, and operates the three largest strip mines in the State.

Out of the Rustler-Tribune, which reported Minot's earliest events, there grew the Minot Optic Reporter, which is now the Minot Daily News. The Democrat, a political publication, has grown into the Dakota State Journal, and the weekly Ward County Independent is also published in Minot. A radio station, KLPM, maintains studios in the Fair Block on South Main Street.

With improved transportation facilities and good roads, Minot has become a medical center for the northwest section of the State. Two large hospitals, two smaller private hospitals, and medical and dental clinics are maintained.