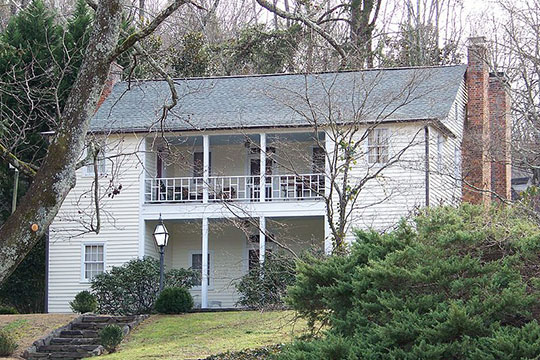 The small mountain town of Tryon [‡], North Carolina, lies in the far southern section of Polk County, just north of the North Carolina/South Carolina state line. Tryon is located approximately four miles southwest of Columbus, the county seat, and Interstate 26. The town was laid out in a circle, roughly bisected by a prominent commercial street, Trade Street, which runs parallel to the railroad tracks from Howard Street at the north end of downtown to McCown Street at the south end. Given its proximity to the railroad tracks and first depot (which was located on the east side of the tracks roughly opposite the Tryon Theatre, 45 S. Trade Street), Trade Street (US Highway 176) became the center of business and industry, although the town grew slowly, but steadily, in the last decades of the nineteenth century. In 1889, Tryon consisted of twenty-four houses, three stores, and the depot.

Following Tryon's incorporation in 1885, the town was formally laid out in a one-half-mile circle around the railroad depot, which was located at the time on the east side of the tracks near their crossing with South Trade Street. Trade Street quickly emerged as Tryon's primary commercial corridor running parallel to the railroad tracks along their east and northeast side. At the time of the town's incorporation, several businesses, including T. T. Ballenger's dry goods store and blacksmith shop, were located along Trade Street. By 1889, the town also boasted twenty-four residences, as well as multiple fruit farms and vineyards in the surrounding area. According to a sketch written by Tryon resident Susan Erskine Rogers in 1897, Trade Street was also home to Missildine's Drug Store, the post office, Livingston's Livery Stables, and a few residences.