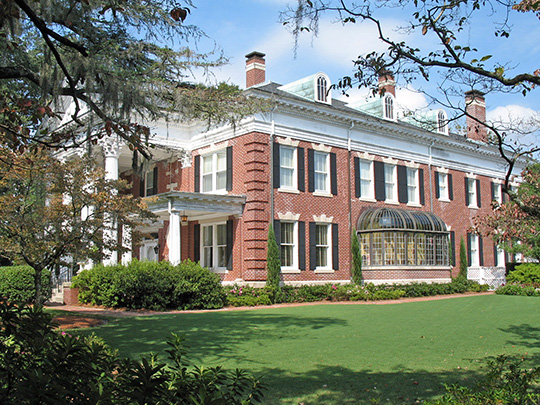 The Market Street Mansion District was listed on the National Register of Historic Places in 1975. Portions of the content on this web page were adapted from a copy of the original nomination document. [‡]

The Market Street Mansion District in Wilmington is composed of a consistent grouping of imposing early twentieth century houses in full-blown Neo-Classical and Neo-Colonial Revival styles, enhanced by great overhanging trees, brick and iron walls, and handsome plantings. The individual buildings with their grand scale and elaborate detail embody the confident wealth of the pre-World War I era; they were the homes of railroad and industrial magnates and of the philanthropic heiresses of those fortunes. In addition, the Market Street Mansion District is important as part of Carolina Heights and Carolina Place, early and progressive examples of ambitious suburban planning. The character of the Market Street Mansion District itself, together with the remarkable contemporary documentation from the Wilmington Morning Star, express the ideals of the early twentieth century — an intense interest in modernity, convenience, and sanitation, combined with an honest respect for the grandeur money could buy.

The history of the Market Street Mansion District involves first the development of two progressive, ambitious suburbs, Carolina Heights and Carolina Place and, second, the several prominent individuals who built and lived in the mansions within the district.

Carolina Heights and Carolina Place were developed in the early twentieth century as suburban areas to include the most modern amenities. Carolina Heights was bounded by Market, Grace, 17th, and 20th streets. Instrumental in its development was Miss Mary Bridgers, an heiress of considerable wealth as the daughter of Colonel Robert R. Bridgers, president of the Atlantic Coast Line Railroad. (She is associated with two of the four houses included in the Market Street Mansion District, as well as with the First Church of Christ, Scientist, see below.) Development evidently began in Carolina Heights in 1908; deeds selling the lots indicate the modern facilities that were planned. One such deed (from Miss Bridgers to E.C. Holt), May 12, 1908, specified that "no dwelling house shall be erected on the premises...to cost less than $4,500." Miss Bridgers guaranteed that she would have installed water lines, electric light lines, gas, etc., by October 1, 1908, would "construct a uniform system of modern sidewalks on Market Street and Princess Street," and "would cause to be installed water mains on said Carolina Heights."

Burett H. Stephens, a Chicago architect and engineer, came to Wilmington about 1906, opened offices in the Odd Fellows' Building and was managing engineer in charge of the development. He also was the architect for a number of individual buildings in Carolina Heights, including some in the Market Street Mansion District. The DeRosset Development Company was in charge of the street and sidewalk improvements and laying the water and sewage systems.

An article in the November 8, 1908, Wilmington Morning Star has a sketch by Stephens that shows the project well underway. The enthusiastic account predicts that Carolina Heights "promises in the very near future to be not only Wilmington's most fashionable but one of its most delightful suburbs."

The report gives a vivid picture of the progress of the development, as well as revealing the concerns of the era:

Not many people know that work just completed and that in immediate contemplation, including the water works and sewerage systems and street and sidewalk improvements will aggregate upwards of $100,000 and that eventually much more than that amount will be expended in the development of this splendid suburb. Situated high and dry, with the best natural and artificial drainage, the suburb will be the ideal residence section of rapidly growing Wilmington; in fact, the new year will find many leading families domiciled there in handsome homes erected within the last few months. With all modern conveniences easily available and assurances that cars will be eventually operated directly through the suburb to Delgado up Princess and out Twentieth Street, little would seem to be desired in the selection of Carolina Heights as a permanent abiding place.

The disposal plan now being installed on the premises is located on property recently purchased...part of the old city rock quarry tract. The work now going on at Carolina Heights probably embraces the most forward step Wilmington has taken in a long time and those behind the enterprise are deserving of the highest commendation for what has been and what is being done. It is a most splendid illustration of the fact that progress is still the watchword for Wilmington and that the city is growing in spite of the cry of panic and hard times.

A number of lots were sold in 1908 and 1909, followed — according to accounts in the Morning Star — by a second series of sales in 1913. The March 25, 1913, issue reports "FURTHER DEVELOPMENT IN WILMINGTON'S HIGH CLASS SUBURB — Carolina Heights," and relates that workmen are making "further improvements in the undeveloped portion of Carolina Heights, possibly Wilmington's highest class and most successful suburb," before placing on the market the remaining lots there.

Contiguous to and roughly contemporary with Carolina Heights is Carolina Place, adjoining it across Market Street to the south. Less is known of its history. It was evidently developed during the years 1908-1920 by the American Suburban Corporation of Virginia. It is possible that some of the same companies and people worked on both developments. Now gone, but important to the history of the district, was the First Church of Christ, Scientist. The church, constructed in the first decades of the twentieth century, was the second structure of that denomination to be dedicated in North Carolina. The property was donated to the congregation by Miss Bridgers.

The brick Neo-Classical Revival mansion (1705 Market Street) on the northeast corner of Market and 17th streets in the Carolina Heights development, was begun about 1907 by Miss Mary Bridgers. The Morning Star of November 8, 1908, reported the house as having been completed. The property was sold to Thomas Emerson, president of the Atlantic Coast Line Railroad, in January 1909, possibly in an unfinished condition (despite the newspaper account) as Emerson engaged an architect and contractor. Miss Bridgers began another house for herself about 1909, and lived with her friend Miss Ella Weill in Carolina Heights until her death in 1910. The picture of the house identified as Miss Bridger's in the 1908 Morning Star appears to be the same design as the house sold by Emerson, in August, 1923, to Sarah Graham Kenan of St. Augustine, Florida; it was advertised in that month, together with a photograph of "This Elegant Emerson Home." Thomas Emerson died in 1913; in 1914 his widow rented the house to Lyman Delano, Executive Vice President of Atlantic Coast Line Railroad.

Sarah Graham Kenan was the widow of James Graham Kenan, and a native of Wilmington. Her sister, Jessie Kenan Wise, lived next door. She, like her sister, was a wealthy heiress as sister of the late Mary Lily Kenan, widow of Henry Morrison Flagler, cofounder of the Standard Oil Company and developer of the east coast of Florida. Mrs. Kenan engaged Tom Hastings of Carrier & Hastings of New York City to make some changes in the interior arrangement of the house when she moved in, naming it Sunnyside. On June 15, 1931, the house caught fire and sustained considerable damage in the attic and on the second floor of the house. At that time the house was greatly remodeled, and received much new and heavier woodwork in and outside. A brother, William Rand Kenan, Jr., reported that the remodeling was done by architect Leonard Schultz of New York. Mrs. Kenan, like her sister, Mrs. Wise, and her brother William Rand Kenan, Jr., gave heavily to worthy causes, and especially to education. On her death on March 16, 1968, her nephew, James Graham Kenan; who had inherited Sunnyside, presented it to Wilmington College, now the University of North Carolina at Wilmington. Since May, 1969, it has been the residence of the chancellor.

On May 12, 1908, Edwin C. Holt purchased a lot from Miss Mary Bridgers at 1713 Market Street in the new Carolina Heights subdivision. On November 8, 1908, the Wilmington Morning Star reported that Mr. Holt "is having erected one of the largest and prettiest homes in the State."

An article of November 22, with an illustration, noted that "the plans and specifications for the handsome new residence are by Mr. B.H. Stephens, who is also the builder upon the guaranteed cost, plus a fixed scheme, system which is generally in vogue throughout the North." It was reported that the "residence will not only be the most modern but one of the most handsome in the city, costing upwards of $11,000." The account continued:

The residence is of the semi-Colonial style of architecture and is very pretty. On the first floor are parlor, reception room, library, dining room and den, with all necessary kitchen, pantries, and servants' quarters. Upstairs one of the most attractive features is a 12-ft. front porch, extending 53 feet in length. On this floor there are five rooms with three connecting bath rooms, attic for private ball room or billiard and amusement room. The bath rooms are handsomely tiled and wainscoted with all modern improvements of every character.

The residence will be heated throughout with hot water and will be fitted for both gas and electric lights. It will be one of the most conveniently arranged and most modern in the city and both the architect and Mr. Holt are to be congratulated upon the nearness of its completion.

On May 16, 1916, the Holts sold the house to Jessie Kenan Wise, widow of Joseph O. Wise. Mrs. Wise was a native of Wilmington, the daughter of William Rand Kenan, who was a native of Kenansville in Duplin County, North Carolina, and one of the most prominent men in Wilmington. Mrs. Wise, like her sister, Sarah Graham Kenan, who lived next door to her, was an heiress of Mary Lily Kenan Flagler. On the death of Mrs. Wise in 1968, her heirs gave the property to Wilmington College, now the University of North Carolina at Wilmington, as a memorial to her.

Construction of this frame Neo-Classical Revival house (1710 Market Street) was begun for Miss Mary Bridgers about 1909, but she died on November 10, 1910, as a result from a fall on the construction site, and the house was not completed. J.W. Brooks purchased the property the next year, and completed the house, where he and his wife lived until March 11, 1927, when they sold it to John Denning Corbett. Mr. Corbett died a few years later, and the house was sold to C.B. Parmele who in turn sold the house to Miss Mildred Hutaff on September 28, 1936.

The Bluethenhal House (1704 Market Street) located at the southwest corner of Market and 17th streets in the Carolina Place development, was begun March 22, 1917. The house was built by Herbert and Janet Weil Bluethenhal. Mrs. Bluethenhal, who still [in 1974] lives in the house, is a member of the Weil family, prominent Jewish merchants and philanthropists of Goldsboro. She has been active in social welfare, and instrumental in establishing the volunteer Family Service Society of Wilmington. Mr. Bluethenhal was a prominent Wilmington businessman.