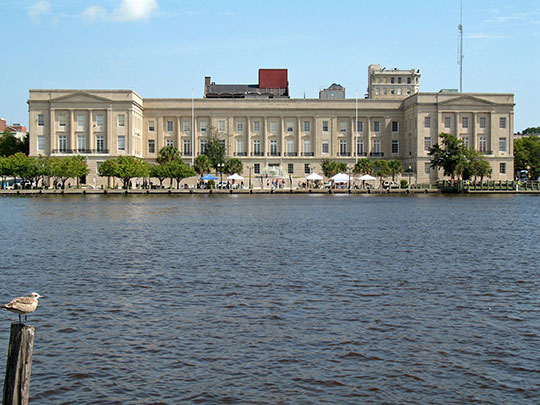 The United States Federal Building and Courthouse was listed on the National Register of Historic Places in 1974. Portions of the content on this web page were adapted from a copy of the original nomination document. [‡]

Still known locally as the Custom House, the neo-classical building was completed in 1919. It consists of a central mass with balanced projecting wings having engaged pedimented porticos. The first floor is rusticated and is separated from the smoother upper wall surface by a stringcourse. The second and third story surfaces alternate between recessed areas with columns and flush areas flanked by pilasters. An unadorned frieze, simple molded cornice, and solid balustrade crown the building.

There are fifteen openings across the central mass and five on the projecting ends. Windows on the first and third floors are eight-over-eight, and are cut into the stone. Window treatment of the flush area on the second floor is identical but with the addition of four-light transoms. The French doors in the recessions of the central mass and the engaged porticos of the wings of the second floor have balustrades with cast iron rinceau and eagle motif. The five French doors denoting the main entrance area are pedimented while all others have only a simple architrave.

The south facade on Market Street has eight openings. Across the Princess Street or north facade are seven openings spaced between projecting columns. The three entrances on this side have keystones with carved urn motifs, suggesting that this was the major secondary entrance to the building originally. It is presently used as the main entrance. The back of the building fronts an alley dividing the property from other office buildings.

Although the interior plan of the building has been altered little, details have changed considerably. One exception is the entrance foyer of the north or Princess Street side. Most of the wall surface of the foyer is rusticated white marble with some use of plaster. The ceiling is decorated with neo-classical motifs while the floor is black and white marble. Separating the foyer from the hall are three open arches corresponding to openings to the elevator and stairways across the hall.

Original plans and elevations for the building show that the courtroom on the third floor was originally elaborately furnished. It is now a relatively plain rectangular room. Remaining is the raised freestanding judge's platform at the back of which is a series of columns connected by a frieze and cornice. On each end of the cornice is an urn; in the center is a gilded eagle.

Described as, "the pride of the city" in 1919, the United States Federal Building and Court House remains a major structure in downtown Wilmington, North Carolina. Originally labeled the Custom House, Appraisers Store, and Court House, it reflects the economic development of Wilmington as a port city on the Cape Fear River.

The Federal Building is located on the site of earlier Wilmington custom houses. As early as 1819, property within the same block was purchased for use as a custom house. The structure burned in 1840, and was replaced in the mid-1840's with a custom house designed by the noted New York architect, John Norris. Original drawings and plans in the Atlanta Regional Office of the National Archives show the Norris building was a superb three-story Greek Revival structure which combined functions as post office, courthouse, and custom house.

In 1914-1915, the old custom house was demolished to make way for the newer, larger building. Additional land on the block had been purchased over a period of years. The Wilmington Morning Star reported that the cornerstone was laid December 9, 1916. It reads: "WILLIAM G. McADOO/SECRETARY OF THE TREASURY/JAMES A. WETMORE/ACTING SUPERVISING ARCHITECT/1916." The building had been expected to be completed by early 1918 at an estimated cost of $500,000. World War I delayed completion until the following year when in May, 1919, the United States Court held session in the courtroom even though the building was not quite ready for occupancy. "A steady stream of humanity" viewed the structure on July 19, shortly before federal agencies moved in.

A unique architectural feature of the Wilmington Federal Building was the incorporation of the design of the front facade of the earlier Norris custom house into the projecting wings of the present structure. The pedimented portico sections, even to the cast iron details, are a repeat, if not an exact reproduction of the 1840's custom house.

Custom services are no longer housed in the Federal Building. It is occupied currently by the United States Courts, the Corps of Engineers and other agencies.

A History of Public Buildings under the Control of the Treasury Department. Washington: Government Printing Office, 1901, pp.454-455.