Photo: A view of Southport from the pier at Waterfront Park. Photographed by user:Dincher (own work), 2008, [cc-by-3.0 (creativecommons.org/licenses/by/3.0)], via Wikimedia Commons, accessed April, 2015. 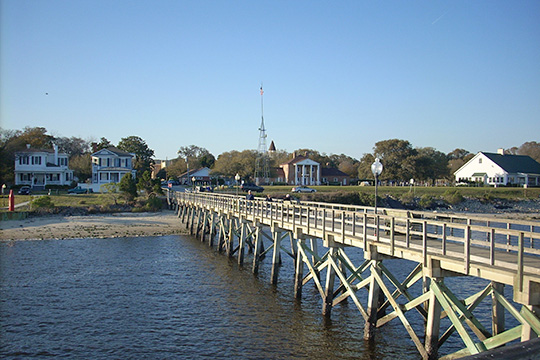 For over one hundred and eighty years the destiny of the small coastal town of Southport, established 1792 as Smithville, has been linked with the maritime fortunes of its inhabitants and the nation. Throughout the late eighteenth, nineteenth, and early twentieth centuries, the primary occupation of Southport citizens was river piloting. Ships that entered the Cape Fear River were guided by Southport pilots past dangerous shoals at the mouth of the river to the port of Wilmington twenty-five miles upstream. When commerce prospered, the river pilots were busy and made good wages and the town as a whole flourished. All too often, however, there were too many pilots and too few ships to escort. Southport appears to have been the only town in North Carolina whose livelihood depended upon this enterprise.

Southport is one of the few towns in the state which has so satisfactorily retained its late nineteenth century appearance of meandering streets, unrestricted by curbs or property lines. Residential streets are canopied with large and gnarled water and live oaks and lined with modest frame houses. The last two decades of the nineteenth century were flush times for river traffic and the town and the architecture of the historic district mirrors this economic prosperity. Street after street is filled with unpretentious yet sturdy one and two-story dwellings. These late nineteenth century houses feature repetitive plan configurations and simple stylistic details which produce an integrated architectural townscape. Because nearly all the buildings can be traced to an individual carpenter-builder and a specific year of construction, the town presents an excellent study of Victorian building practices in a small North Carolina town.