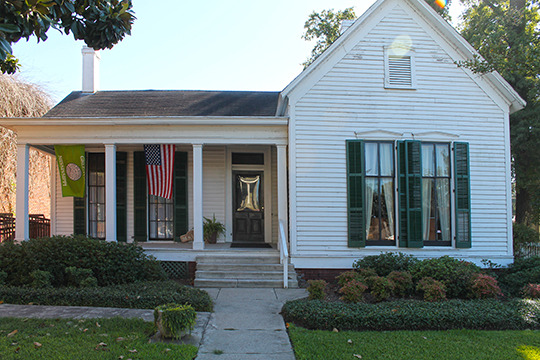 The town of Greenville was founded around 1844 when Issaquena County was carved out of Washington County. The reorganization of counties resulted in the need to move the then county seat from Princeton, a town only few miles north of the Issaquena County line, to a more central location. A site was selected on the bank of the Mississippi River at Bachelors' Bend and construction of a courthouse began in December 1846.

The name Greenville was chosen in honor of General Nathaniel Greene, one of George Washington's officers. The town remained at this location until the river carved itself into the town and became a constant threat. Therefore, after further damage from Federal forces during the Civil War it was decided by the legislation to establish a new location that would be less threatened by the Mississippi River but would still provide businesses with easy access to the waterway. This discussion led to the establishment of the new and present location of Greenville, a location approximately one-and-a-half miles north of the original 1846 site.

Greenville was quick to recover from the Civil War. The town was incorporated in 1870 and the organization of its railroad soon followed. The railroad and river were very important to the agricultural economy of Greenville. Even after the Civil War changed its social system, many of the large plantations were converted to smaller farms with tenant workers. By 1878, the Greenville, Deer Creek, and Rolling Fork Railroad was in operation and provided an easy means of shipping goods between the Delta counties. The strong economic base of the area attracted many prominent families to Greenville thus providing the town with the reputation of being a cultural oasis. Greenville has been the home to many accomplished writers including William Alexander Percy and Hodding Carter Jr., Pulitzer winning editor of the Delta Democrat Times who inspired such authors as David Cohn, Walker Percy, Shelby Foote, Ellen Douglas, and Beveriy Lowry.