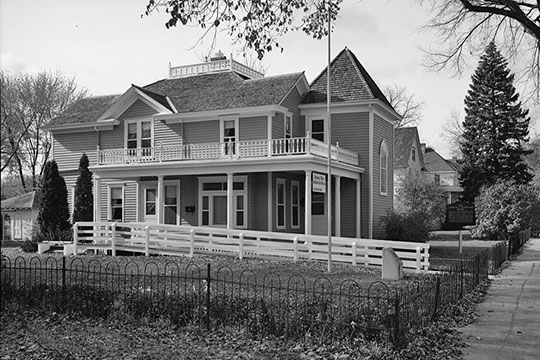 Granite Falls, located at a natural falls on the Minnesota River at the border of Yellow Medicine and Chippewa counties, was first settled in 1870. A dam and mill were built at the falls in 1871-72 and in 1872 the town was platted, encompassing land on both sides of the Minnesota River. During its first years of existence Granite Falls remained a somewhat isolated river community, with transportation supplied by two major stage coach lines and steamboats which navigated the Minnesota up to a point a few miles south of Granite Falls. In 1878, however, the Hastings and Dakota Railroad (later a branch of the Chicago, Milwaukee and St. Paul) constructed a long-awaited track to the east side of Granite Falls from Glencoe and then extending north from Granite Falls along the east side of the river to Montevideo. The first passenger train reached Granite Falls in November of 1878, marking the beginning of a new era in which the town was served by rails which transported people, news, freight, and agricultural products between Granite Falls and the rest of the state. Ten years later, in 1888, rail service was further expanded when a second rail line, the Willmar and Sioux Falls (later the Great Northern), was built through the west side of Granite Falls.