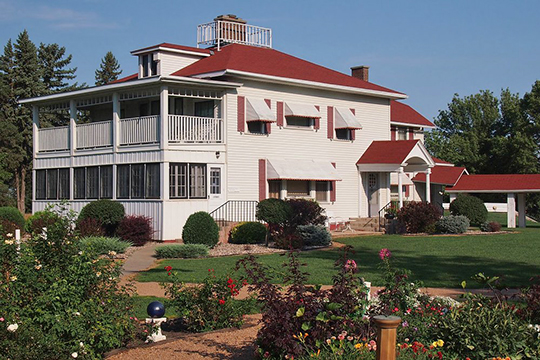 Redwood County was created on February 6, 1862 by the passage of a bill within the Minnesota State Legislature — this bill gave the County the borders it still has today. The population count taken through the Federal Census of 1870 showed that 1,829 people called Redwood County home.

The Old Agency Stone House, the oldest building in the county, was built in 1861. This structure is located about 8 miles east of Redwood Falls and is the site of the oldest cemetery in Redwood County. It is the site of the Sioux Uprising in 1862, a conflict between the Dakotas (Mdewakantowan, Sissetowan, Wahpetowan, and Wahpekute people) and the United States government.

The first saw mill was built on the Redwood River in 1855 by the United State government. The first court house (a wooden structure) was built in 1873 and replaced in 1891 with the present brick one. Additions to the court house were constructed in 1963, 1967 and 1970. The Redwood County courthouse is located in the eastern portion of the Redwood Falls Central Business District. The structure is well preserved even though it was originally constructed in 1891. During the summer of 1969, a major expansion project was initiated to increase office space for existing County functions as well as to provide needed space for the County Human Services Department.

Steamboat travel started up the Minnesota River in 1850, and reached Redwood County in 1853, bringing in supplies and people and carrying out wheat from what was originally called Riverside, then North Redwood, and now Redwood Falls. In 1881, Riverside became the birthplace of Sears.

Communities within Redwood County that developed based on railroad decisions were laid out in patterns that are still recognizable today. The relationships between railroad track, passenger depot, freight house, grain elevator, and commercial streets are readily identifiable within southwestern Minnesota towns and are usually familiar to most people who have traveled in Midwestern America.

The railroads came into the southern part of the county in 1873 and to Redwood Falls in 1878. The northern part of the county was served in 1884. In 1899, the railroad extended from Sanborn to Vesta, through Wabasso, and on to Marshall by 1901. Currently, there are two railroads operating within Redwood County. These include the Minnesota Valley Regional Railroad Authority (MVRRA) with operations by Minnesota Prairie Line, which runs in the northern portion of the county, and the Dakota Minnesota and Eastern (DM&E) Railroad, which runs in the southern portion of the county. The MVRRA enters the county just west of the City of Belview, then passes through Delhi and the northern portion of Redwood Falls and leaves the county just east of Highway 71. The DM&E railroad enters the county one mile south of U.S. Highway 14 adjacent to County State Aid Highway (CSAH) 20 then follows CSAH 20 through Walnut Grove and continues through Revere, Lamberton and Sanborn.

During periods of early Redwood County history, immigrants finding their way from overseas were often met with difficult circumstances. The founding father of the Redwood Falls community, Colonel Sam McPhail, aided the initial developments by locating claims for land seekers in 1863 (the first group of families arrived in 1864). In addition, Colonel McPhail served as the editor of the first newspaper, was the first road overseer of the county, built the first building in the county, and was the first financial director of the county.