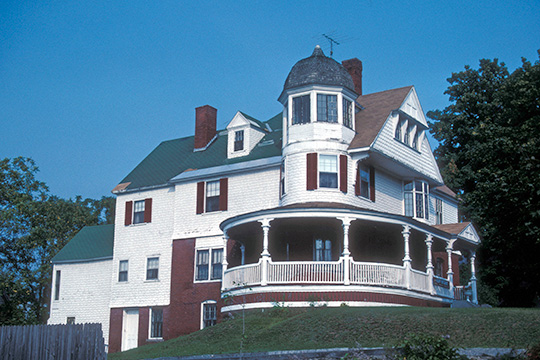 The original settlement of the Town of Skowhegan, seat of Somerset County, was made on the island of that name in the Kennebec River and even today, though the business and industrial area has spread to both banks, the island is to some extent the physical center. Long before the first white man came to the region in 1771, Indians knew the island, had explored the falls, had taken fighting salmon from the waters below it, and had named the place Skowhegan (place to watch for fish).

Among those who were born or have lived here are Abner Coburn (1803-1885), one of Maine's Civil War governors who was prominent in the economic and cultural development of this section of the State; Daniel Dole (1808-?), a missionary to the Hawaiian Islands who was instrumental in the establishment, and became president, of Oahu College, which prepares white students to enter universities; George Otis Smith (1871), a former director of the U.S. Geological Survey; Charles A. Coffin (1844-1926), first president of the General Electric Company; Artemus Ward (Charles Farrar Browne, 1834-1867), American humorist, who was employed a few months in his boyhood in a Skowhegan printing office.

At the eastern end of Water Street is attractive Coburn Park, extending for nearly a quarter of a mile along the highway and named for Abner Coburn who gave much of the land to the town.

The State Reformatory for Women, housed in six modern buildings on Norridgewock Avenue, was opened in 1916. Women delinquents over 16 years of age are confined in it.