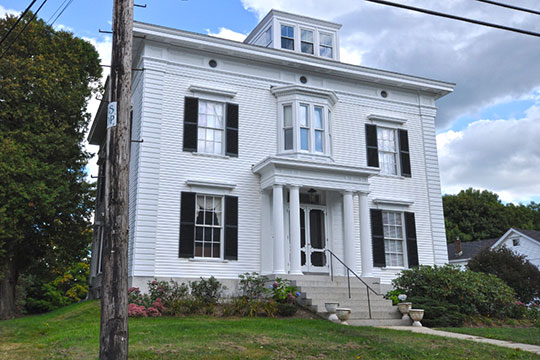 Bath, named for the ancient city of Bath, England, has a history of almost two centuries of shipbuilding, though its yards turn out comparatively few vessels today. Its heyday was in the wooden-ship era, though the first steel sailing vessel, a four-master, was built here. Naturally, many of its inhabitants have been shipmasters and ship owners, and the older homes are filled with souvenirs from far parts of the earth printed India linens, teakwood chests, blue and white ginger jars from Canton, and strangely shaped sea shells. During the World War the local yards were active again, attracting several thousand workmen, but the revival was temporary. The chief event in local life still is, however, as it has long been, the launching of a new craft; and the townspeople follow the histories of Bath ships with pride.

The Bath Iron Works, in the center of the city at Union and Water Streets (below the Carlton Bridge) was founded by General Thomas Hyde after his return from the Civil War. Some fairly large and many small Government vessels have been built here, including the battleship 'Georgia,' cruisers, and lighthouse tenders. Many fine yachts and sailboats have also come from this plant which built the 1937 America's Cup winner, the 'Ranger.'

Near-by are other shipbuilding works that can make any but the largest vessels.

The new Davenport Memorial Building, right on Front Street, housing the Bath municipal offices, has in its tower a bell cast in 1805 at the Paul Revere foundry. The Davenport Memorial Museum, in the building, contains ship paintings and original half-models from which were built famous Kennebec merchantmen and vessels launched in other Maine ports, as well as many exhibits of importance in Maine marine history.

In the beautifully landscaped City Park, on Front Street, is a cannon taken from the British man-of-war 'Somerset,' which was 'swinging wide at her moorings' in Boston Harbor when Paul Revere made his ride. The cannon was used for the firing of salutes at Bath until the latter part of the 19th century.

The home of Herbert L. Spinney, 75 Court Street, houses a Collection of Native Flora and Fauna. Mr. Spinney was associated with the Smithsonian Institution for many years.