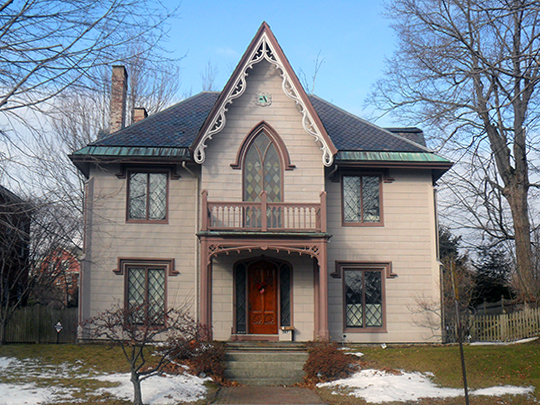 Portland, Maine's largest city and Cumberland County seat, holds the economic and commercial key to a vast territory extending north and east to the Canadian boundaries. At its feet lies Casco Bay with its '365 islands' one for every day in the year a miniature New England Aegean. Portland itself was once almost an island, and even now access to the city without passing over water is possible only from the northwest. The metropolitan area, clustered on an arm of land shaped like a saddle, is almost entirely surrounded by the waters of Casco Bay, Back Cove, and Fore River. Lying between the two elevations, crowned by the Eastern and Western Promenades at opposite ends of the city, the central section of the city extends along a sagging ridge in a general east-and-west direction. Tall elms and other trees line the streets and shade the city's twenty-six parks. Portland owes much of its attractiveness to these trees that in summer hide its architectural deficiencies and make up for some of the ill effects of overcrowding.

Because of its geographical position in the state, Portland is a shipping port and railroad terminus as well as the Gloucester of Maine. Large ships from European and South American countries and the Orient, and smaller coasting vessels, meet in its harbor. Three railroads enter the city. Maine's highway travel, almost without exception, touches Portland before spreading fanwise to other sections of the state. During the tourist season, the city is the hub for a vast resort region, and by air and water, rail and highway, vacationists pour into the city, and then by a dozen divergent routes make their way to summer homes and playgrounds to the north and east. At the city's very back lies Maine's most highly concentrated summer resort country. And because Portland is the chief city of Cumberland County, one of the most densely populated sections of Maine, it is also of considerable political, as well as commercial, strength.

Its history has little to distinguish it from that of any average large American city except perhaps the unusual amount of travail and suffering that have gone to building it to a position of security. It has risen and fallen again, not once, but three times. The Indians devastated it; as a prelude to the Revolution the British burned it; and in 1866, the 'great fire' again left it a city of embers. Its first years were marked by the struggles over conflicting claims for the land on which it grew between England and France, between squatters and landlords, between individual citizens and great corporations. Then, in the nineteenth century, it achieved great importance and wealth. That, too, is all of the past. Portland today lives on in a kind of somnolence that belies its past greatness and its present real activity and vitality.

The first recorded settlement on the site of Portland was made by Christopher Levett, 'the King's Woodward of the County of Somersetshire in New England.' Levett built a stone house on Hog Island or House Island (historians have not agreed on the site) where he and his company spent the winter of 1623-24. In the spring he returned to England, apparently with the intention of arousing interest in forming the city of York at a place he called Quack, near Casco, presumably the place where Portland stands. He left his house garrisoned with ten men. There is no indication that he ever returned, and no one can say what happened to the company left occupying the stone house.

The next settler to occupy the site for any length of time was an unscrupulous trader named Walter Bagnall, called 'Great Walt' because of his size. As early as 1628 Bagnall was living on the Spurwink River, not far from Richmond's Island, in a hut with a solitary companion known only as John P. Walt exchanged firewater and worthless trinkets with the Indians for valuable furs, and is alleged to have netted a profit of more than 400 (a considerable sum at that time) in less than three years, before he was killed in 1631 by the Indian chief Squidraset and other dissatisfied customers who had already begun to chafe under the 'beneficent' practices of traders of his type.

About this time, George Cleeve and his family established themselves on the land now occupied by the city proper, which was known successively thereafter as Machigonne, Indigreat, Elbow, the Neck, Casco, and Falmouth; the name Portland, of English origin, was first given to Portland Head on Cape Elizabeth and to the sound between the Head and Cushing's Island. In 1630 a body of religious fanatics called the Husbandmen was granted a patent of land at Sagadahoc, that came to be known as 'the patent of the Plough' after their ship the 'Plough.' They arrived in 1631, but dissatisfied with the location given them, scattered to other Colonies. Cleeve, ambitious and unscrupulous, ingratiated himself with Sir Ferdinando Gorges, proprietor of Maine (then called New Somersetshire) from 1635, and was appointed Deputy Governor of the Province. He was ousted from that office when it was shown he had acquired it by making false accusations against Gorges's previous deputies. Still determined to control the region, Cleeve proceeded to England, where he found a patron in a Colonel Rigby, who purchased the patent of the Plough, named the estate the Province of Lygonia, and put Cleeve in charge as deputy president. Cleeve returned and summoned his first court in Casco, 1643-44, where he proclaimed his authority over the land 'from Sackadehock to Cape Porpus, being about thirteen leagues in 'length.'

There ensued a tedious quarrel between Gorges's agents and Cleeve over the proprietorship of the Colonies of the Casco Bay region; it was taken to courts first in Boston and then in England. Finally Rigby's claims were upheld, and for a while Cleeve enjoyed virtual dictatorship of the Province of Lygonia. Rigby died in 1650 and Massachusetts assumed control of the whole region in 1652. Cleeve kept up an empty show of authority until 1658, when all the inhabitants of the Maine Colonies submitted to the government of Massachusetts. Ruined by his protracted litigations, he died in poverty.

All through this period and for some time to come the Casco region continued as the center of unhappy warfare between 'selfish promoters and contentious claimants.' 'No one,' wrote an early historian, 'could be sure of reaping the rewards of his labors and industry.'