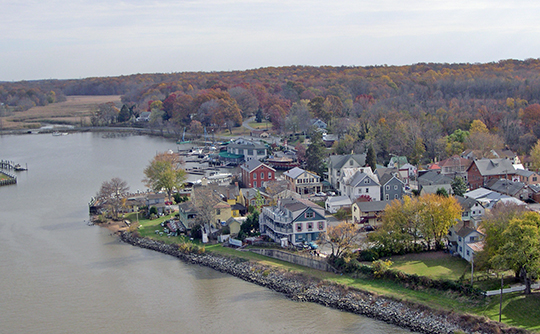 The South Chesapeake City Historic District [‡] was listed on the National Register of Historic Places in 1974.

Chesapeake City is located at what was once the end of one of the nation's early lock canals. The canal was built to connect the Delaware River with Chesapeake Bay via a meandering cut across the isthmus which begins the Delmarva Peninsula. It eliminated the need for a 285 mile river, bay, and sea journey between the commercial region around Philadelphia and that around Baltimore. It has since become a part of the Atlantic intercoastal waterway.

Cecil County's founder, Augustine Herman, first saw the need for a canal in the late seventeenth century. In 1799 a corporation called the Chesapeake and Delaware Canal Company was formed and began surveying operations. Among the surveyors was the United States capitol architect, Benjamin Latrobe. Digging began in 1824 and was completed in 1829. The completed waterway was 36 feet wide and ten feet deep. Still, the canal bottom was ten feet above sea level. Locks were thus required to lift vessels 20 feet to float on the canal surface.

A town grew up around the locks because it was a loading and unloading point for ships and canal barges. Also, a mill landing farther up Back Creek which had been a local shipping point now shifted to the town.

By 1839, the new community was known as Chesapeake City. Here lived those who tended the canal. Warehouses and a lumber industry were of early importance. The town grew rapidly throughout the remainder of the century attaining a peak population of approximately 1,400.

In 1919, the Federal Government purchased the canal and operated it with an eye to eliminating its twists, bends and numerous accidents. This was a boon to long distance shippers but a blow to local commerce.

As soon as the locks were removed in a conversion to sea level depth the town ceased to grow. Time and progress passed it by. In 1943 a draw bridge connecting north and south Chesapeake City was destroyed and replaced by a overhead bridge to the west. Hence 20th century traffic as we know it today was diverted away from the town and it has remained essentially unchanged.

Today the largest remaining segment of the original town is found on the south side of the canal where several streets of almost unaltered mid-to-late-19th century buildings still stand. Overall, this area retains an authenticity impossible to recreate in any modern construction. It is a part of both national and local heritage, a vital anchor very much needed for the cultural health of the community and the public at large.