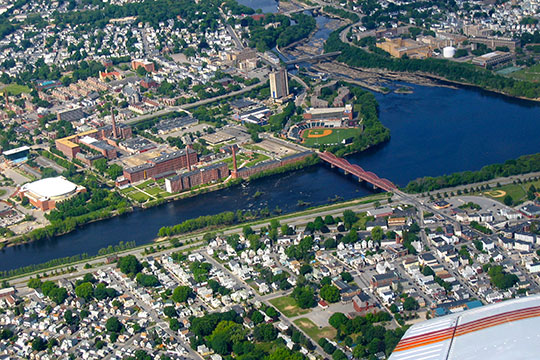 Before settlement by the Europeans, Native Americans of the Pennacook tribe inhabited the area now known as Pawtucketville. Their word "Pawtucket" means "place of loud noise," referring to the falls in the Merrimack River. The Pennacooks were not unfriendly to the first settlers and the Massachusetts legislature, in 1653, granted them a tract of land near Pawtucket Falls. These first Europeans gave the district the name "The Village at Pawtucket Falls," which was later shortened to Pawtucket Village and finally to Pawtucketville. Unfortunately, hostilities increased and the settlers constructed several garrison houses for protection. As an outcome of King Philip's war in 1674, many of the Native Americans moved to Canada.

In the 1600's, the government had given land in this area as military grants to reward men for their service; but these men soon sold their holdings without settling here. In 1664, Samuel Varnum and Edward Colburn bought land and became the first permanent European settlers in Pawtucketville. By 1701, 135 years before Lowell became a city, permission was received to incorporate Pawtucketville as part of the Town of Dracut. By this time, there were 23 families farming land north of the river.

Carving a community out of the wilderness gave the early settlers a sense of independence from settlements on the south side of the river. They were anxious to establish their own church and in 1711 voted to build the first meetinghouse. The present Pawtucket Congregational Church is a descendant of this first church. Established in 1797, it is the earliest church within present day boundaries of Lowell. Participation in the Underground Railroad, a Paul Revere Bell and impressive stained glass windows are all features contributing to the Church's historic importance.

The first bridge linking Pawtucketville to the south side of the Merrimack River was constructed as a toll bridge in 1792. The bridge corporation also constructed Mammoth Road, a major highway linking Massachusetts to Concord, New Hampshire and beyond. Increased traffic over the bridge resulted in the development of commercial activity nearby. As Lowell's mills were built over the decades of the nineteenth century, mill workers saw opportunity to escape crowded living conditions in the city by crossing the bridge, resulting in the dense settlement of East Pawtucketville that came to resemble Lowell's more traditional, industrial-era neighborhoods. These neighborhoods are still in existence today. Immigrants, especially from Ireland and Canada, further swelled the population of Eastern Pawtucketville. West Pawtucketville, with its location further away from the bridge, remained sparsely developed with farms and abundant open space.

By the late 1880's, an initiative was launched to establish a 'driving park' or 'riverfront boulevard' in West Pawtucketville. Landowners whose property ran to the bank of the river were asked to donate the riverfront acreage for construction of a grand tree lined roadway. In all, nearly forty acres were donated by over a dozen landowners for the construction of the boulevard with the stipulation that it be used for the road and the creation of a public park. The riverfront parkland and boulevard so enjoyed by residents today is the result of these landowners' foresight and generosity.

In 1891, Lowell General Hospital, one of the larger more influential institutions in the neighborhood and City, was established on the Fay estate. In 1913, the City felt a need for an isolation hospital to treat those with contagious diseases and took part of the Varnum farm by eminent domain. This land today is the site of the schools and park in West Pawtucketville.

In 1895, Lowell Textile School was established and has today become part of the University of Massachusetts at Lowell (UMass Lowell). This institution originally trained technicians and managers for the textile industry. Today it retains a very high reputation for technical training. UMass Lowell and Lowell General Hospital grew into and along with Pawtucketville, and continue to play significant roles in shaping the character of the neighborhood.

As the population of Pawtucketville grew, efforts were made to provide more accessibility to the neighborhood. An electric trolley line was extended into the neighborhood in the 1880s, and in 1896 the Moody Street Bridge was built and led to the growth of East Pawtucketville as a French-Canadian immigrant neighborhood. The neighborhood was nicknamed, "Le Haut Canada" — the High Canada — to distinguish it from working-class Little Canada. The community grew so fast that by the fall of 1897 residents formed the Pawtucketville Social Club on Moody Street to encourage citizenship and petition the City to provide neighborhood services. Moody Street, which later was renamed Textile Avenue, also became the home for dozens of French-owned businesses. The religious life of the community was brought to maturity with the founding of Saint Jeanne D'Arc Church in December of 1922.

After World War II, Western Pawtucketville became an attractive location for suburban-style development, a trend that continues to the present day. The subdivision of woodlands and fields into lots for single-family homes has created a neighborhood character within Pawtucketville distinctly different from Lowell's more traditional neighborhood districts. Most of the farms had disappeared by the 1950's. Nursing homes such as D'Youville Manor and Fairhaven were built here due to the availability of large tracts of land. Despite this rapid development, the character of modern Pawtucketville exudes a feeling of isolation, self-sufficiency and open space.

With the opening of the Rourke Bridge in the early 1980's, Pawtucket Boulevard's accessibility increased, attracting a variety of suburban style commercial, industrial, and multi-family residential development. Traffic through the neighborhood became a concern that continues today. This period of uncontrolled growth proved to be alarming to the long-term residents of Pawtucketville, who appreciate the neighborhood's rural, natural appearance. Efforts should be made to control future development, prevent unregulated growth, and curb growth in a way that preserves and enhances the existing character of Pawtucketville and protects the valuable green and open spaces that define the neighborhood.

Pawtucketville's history reaches back to before the founding of Lowell, and plays host to some of the City's more significant historical sites. These include all the site already mention, as well as Lowell's oldest schoolhouse, the Colburn Schoolhouse, 1755; Webb-Durkee house, circa 1656; Varnum Garrison House, 1676; Colburn Garrison House, 1676: Thomas Varnum House, 1745; Parker Varnum house, 1775; Ansart House, home of a French nobleman who aided the colonies in the Revolutionary War; Lew house, a stop on the Underground Railroad; Clay Pit, Woodbine, Hamblet and Mammoth Road Cemeteries; St. Rita's Church; and places author Jack Kerouac not only lived in but also wrote about in his novels. These and other historical sites are vital to the preservation and protection of Pawtucketville's heritage.