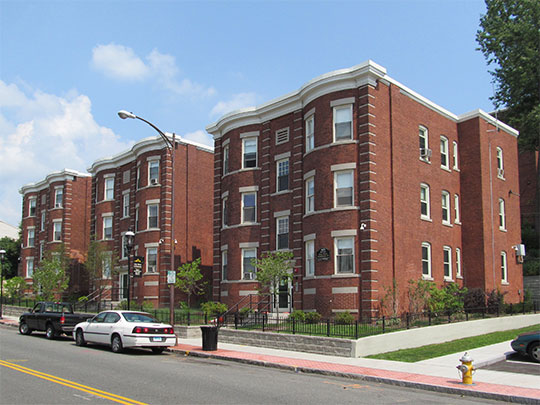 Ancient records and manuscripts lead to the belief that William Pynchon together with Henry Smith, his son-in-law, and Jehu Burr, had visited this spot in 1634 and selected the location for a new plantation. John Woodcock and John Cable built a house, and the first civil action tried in Springfield grew out of their joint agency in this structure, although they built it at the common charge of the planters. The house was built on the west side of the Agawam River in the Agawam meadow, afterwards called "Housemeadow," from this circumstance. Cable and Woodcock kept their residence at this house during the summer, planted on grounds that had been cultivated by the Indians, nearly opposite the present city limits, and returned to Roxbury in the Autumn. This was doubtless the last occupation of the house as the Indians, who were friendly to the settlers, and who were as well aware of the character of the ground as later settlers, informed the builders that the site was subject to overflows. This caused a change to be made in the location of the plantation. Another house was built on the east side of the river, probably on a lot owned by Mr. Pynchon.

Mr. William Pynchon was the father of Springfield, and was revered as such while he lived here, and mourned as such when he departed. He had been connected with the affairs of the Massachusetts colony in England, having been one of the patentees named in the colony charter of 1628. When Governor Winthrop received his appointment in 1629, Mr. Pynchon was appointed a magistrate and assistant, and accompanied the Governor in his passage to the colony, and settled at Roxbury.

The date of arrival of the emigrants upon the river is not known, but it was probably among the first days of May (1636) and immediately, as did the Pilgrims before landing at Plymouth, they set about the establishment of rules by which they would govern themselves and be governed. On the 14th of May, they drew up and signed an agreement. This document is signed by 8 individuals, while the allotments of land to the settlers, which it disposes, are made to 12.

The allotments of land were divided by lines running from the river to and upon the Hill, each containing a home-lot bordering the river, each a portion of the "hasseky marsh," or meadow, lying between the home-lots and the hill, while the latter constituted the wood-lots.