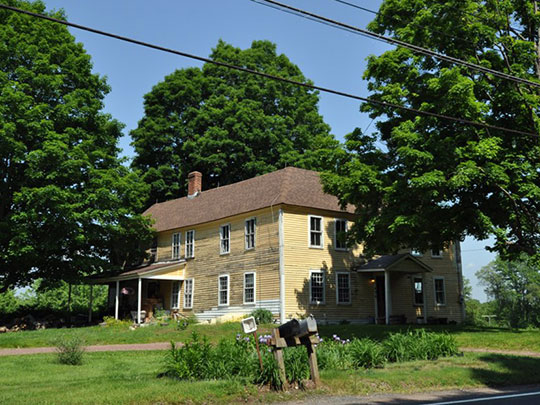 Northfield is one of the most charming of the older rural communities. Built on the Connecticut River, it is crossed by the Ashuelot Brook and watered by more than a score of woodland brooks. Tidy farms dot the broad river meadows and the rolling plains which rise to the wooded uplands. The main street of East Northfield, home of Northfield Seminary, has a double arch of elms, fringing the chaste white frame dwellings of the "Center" as New England farmers always call their village.

Northfield is one of the dozen Massachusetts municipalities which are internationally known, because for the past fifty years it has sent thousands of Protestant missionaries to remote corners of the globe. In 1673 fourteen families moved into Northfield from Northampton and Hadley, but after two years of struggle with Indian raids they abandoned the settlement. In 1714, despite the dangers still apprehended from the French and Indian Wars, a permanent settlement was made.

Agriculture flourished, and to this was added apple-growing. In 1771, when the "merino craze" swept New England, Northfield developed into a sheep-raising community. The town's only venture into industry occurred between 1830 and 1855, in the manufacture of brooms from broom corn, locally grown.

In 1879 Dwight Lyman Moody established the Northfield Seminary for the daughters of farmers, and two years later, in the neighboring town of Gill, the Mount Hermon School for boys.

An equally celebrated Moody enterprise, closely allied with Mount Hermon, is the Student Volunteer Movement, established in 1886 in collaboration with the International Y.M.C.A., which results in the enlistment of many young men and women annually in foreign mission work.

The first American Youth Hostel was founded here in 1934. Separate sleeping quarters are provided for the boys and girls, with a common kitchen and recreation rooms. The young travelers carry their own sleeping sacks, but blankets are provided at the hostels. Each youth must present a Membership Pass, which costs a dollar for those under twenty-five years of age, two dollars for members over twenty-five, and three dollars for a family. Northfield was the first of several hundred towns in the United States which now recognize the cultural and educational benefits of youth hosteling.