Photo: Houses on the western side of the 300 block of N. College Street (U.S. Route 127), College Street Historic District, Harrodsburg, KY. The Historic District was listed on the National Register of Historic Places in 1979. Photographed by User:Nyttend (own work), 2010 [cc0-by-1.0 (creativecommons.org/publicdomain/zero/1.0/deed.en], via Wikimedia Commons, accessed June, 2015. 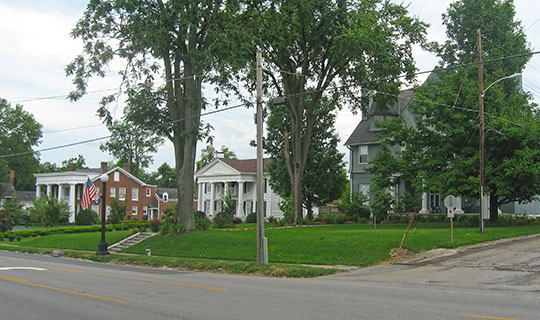 The College Street Historic District was listed on the National Register of Historic Places in 1979. Portions of the content of this web page were adapted from a copy of the original nomination document. [‡]

The College Street Historic District is composed of 27 residences and one commercial building in the northern sector of Harrodsburg. Immediately north of the district, U.S. Highway 127 narrows from a four-lane road into the two-lane College Street.

The College Street Historic District is an uninterrupted concentration of 19th- and early-20th-century buildings that line a significant street in Harrodsburg, the oldest permanent settlement in Kentucky. American architectural evolution is well represented in this diverse collection, but the most visually prominent style is the Greek Revival a style that flourished and gained wide acceptance in Harrodsburg and Mercer County. Numerous persons who have been active in the civic and business aspects of Harrodsburg have resided in the district, and the ambience of the area is that of a comfortable and established neighborhood. The buildings are enhanced by abundant vegetation along the route bisecting the district, and the effect produced is a placid vestige that contrasts with modern encroachments and treeless settings to the north and south.

Originally, College Street was named Warwick Street because it led to the town of Warwick (present-day Oregon), an early shipping port on Kentucky River in Mercer County. The name was changed when Bacon College moved from Georgetown in 1839 to Harrodsburg, where it was located in the area of College Street near the Cornishville Road. Bacon College was renamed Kentucky University in 1857, and in the mid-1860s it was moved to Lexington to merge with Transylvania University, the oldest college west of the Alleghenies.

College Street bypasses the site of Fort Harrod (1775-76) beyond the southern boundary of the district. Three years after the fort was founded, a land office was opened. "Not only outlying lands, but town lots also, were given in consideration of settlements and improvements. Just as soon as it was safe to dwell outside the stockade, lots were improved with log dwellings. Originally a green, the College Street area is near what has come to be called "Old Town" by residents of Harrodsburg. Along this street, frame and brick dwellings have replaced all those of log construction except for one, which dates from the 1820s and originally occupied the center of 3 combined lots. In the 1840s it was remodeled in a Greek Revival style.

The houses along College Street have generally been home to persons significant on the local and state levels. "Diamond Point" was built for Benjamin Passmore, member of a family that settled in Harrodsburg at an early date. The Passmores were among the first merchants in the town, and the number of their names recorded as having served as town trustees attests to their civic-mindedness. "Doricham" has been the residence of two very important families, the Stephensons and the Haggins. The house known as "Rykon" was acquired by the Rikers in 1861. This family descended from the Dutch that had come to Mercer County from New Jersey by way of Pennsylvania in the late 1700s.

The district is bordered on the east and west by residential sections of a different atmosphere. To the north and south are areas of Harrodsburg that are commercialized. Thus, the pedestrian or motorist traveling in either direction on College Street finds himself in a quiet and peaceful interlude composed of older buildings, low stone walls, a few sections of original brick walks approaching several houses, spacious lawns, and ancient trees.