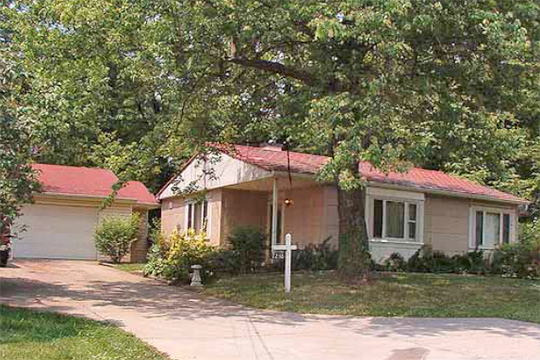 The Lustron House at 7238 Southside Drive was listed on the National Register of Historic Places in 2012. Portions of the content of this web page were adapted from a copy of the original nomination document.

The Lustron House [see: Lustron Steel Houses] at 7238 Southside Drive in Louisville, Kentucky was built in 1950 and is one of only 15 homes produced by the Lustron Corporation and known to have been erected in the Louisville Metropolitan area between 1946 and 1950. Lustrons were a non-traditional response to the post-World War II housing crisis. The Southside Drive Lustron is a one-story two-bedroom Westchester model measuring 31' x 35' with approximately 948 square feet of living space. The house is in good condition and has had few alterations. On the lot there is a garage, a non-contributing building.

This single-story dwelling is located on Lot 45 in Section 1 of the residential subdivision Kenwood Heights. It sits on the lot surrounded by trees and one-story homes of similar size. The lot of land was originally owned by W.M. Smock Incorporated, and was sold March 4, 1949 to Edna M. Gaines and George B. Gaines, the original owners of the house.

The house's long side parallels the street, the exterior measures 31 feet in width and 35 feet in length, with a 6' x 12' corner recess that serves as an entrance porch. The exterior of the house is comprised of 2' x 2' porcelain enameled steel panels in the color Desert Tan. The steel framed structure sits on a concrete foundation and is capped with a gabled roof made of flat rolled carbon steel panels. The house has an entry door on the 12-foot porch wall and a side door that enters into the kitchen on the 35-foot wall opposite the wall that is parallel to the street.

The home was assembled at its existing location in 1950 and has maintained the majority of its original materials, including the roof and exterior panels. The only changes made to the building are replacement of the windows and gutters. These repairs have had little impact on the original design, particularly on the Lustron's feeling as an unconventional approach to post-WWII housing needs. The house has retained the vast majority of its character-defining features and therefore, its integrity remains.