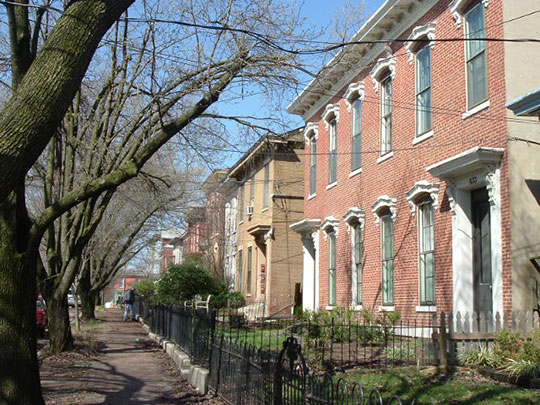 The Butchertown Historic District was listed on the National Register of Historic Places in 1976. Portions of the content of this web page were adapted from a copy of the original nomination document. [‡]

At one time, in the early 19th century, the area now known as Butchertown was the easternmost outpost of Louisville, retaining a suburban character at least until mid-century. The main sources of identity were the Frankfort Pike connecting the mercantile city of Louisville at the Falls of the Ohio River with the fertile Bluegrass region of central Kentucky, and Beargrass Creek. The roads and the forks of Beargrass Creek, which virtually encircled the district, and still define its boundaries and character, were the determining cause of the area's rapid development and distinctive character in the second half of the 19th century.

Much of Butchertown was once the farmland of Colonel Frederick Geiger, a distinguished veteran of the War of 1812, who about 1815 built a country house on the Frankfort Pike that may still exist as part of the large house on Linden Hill at the junction of Story Avenue. Past his property were driven great droves of cattle and hogs, then the staple products of the Bluegrass, as thoroughbred horses are today. Bound for market in the South, they were driven to Louisville where the Ohio River at the mouth of Beargrass Creek provided convenient transportation to the Cotton States.

Although some of the animals were shipped live, it was more practical to butcher them in Louisville, salt the pork and pickle the beef, and pack it in barrels. Thus, the packing business in Louisville began early; no exact records were kept but Louisville's first city directory, published in 1832, reveals that 12 butchers served the needs of the city's own tables and the packing business as well. Already two butchers were up on the east end of Main Street near today's Bourbon Stockyards which didn't exist then. Probably they chose the location to get first choice from the droves of animals coming in the Frankfort Pike, and because it was close to Beargrass Creek providing the water needed in the butchering process and serving as a handy drain. In Butchertown's prime, it is said, the creek ran red with blood from the slaughtering.

Louisville's butcher business was eventually to be dominated by the thrifty Germans who began arriving in the U.S. by the thousands after the failure in their homeland of the Revolution of 1848. Even before then, other Germans were emigrating and the two most important butchers in Louisville as early as the 1830s were two Germans: Frederick Bremaker and Peter Kliessendorf.

As Louisville developed into the pantry of the Cotton Kingdom, the droves of cattle and hogs arriving became immense sometimes 50,000 hogs at once to meet the demand for salt pork. Special inns sprang up in Louisville, offering accommodations for the drovers and pens where the stock could be kept until it was sold. Probably the first was the Bourbon House of about 1834, out on the Pike in today's Butchertown at what is now the corner of Story and Cabel (formerly spelled Cabell). It was the beginning of the Bourbon Stock Yards, which opened in its present location in 1869 and soon absorbed all the other yards that had grown up around other drovers' inns.

As the butchering and pork-packing business grew, skilled German butchers were attracted to Louisville, settling along the Pike (it became East Main Street in the late 1840s, Story Avenue in the early 1870s) near the drove yards, building their shops facing the street, their slaughtering sheds in the rear along the creek. It was these independent "boss butchers" who caused the area to be tagged "Butchertown" as early as the 1850s. They supplied Louisville's home tables, the hotels and the steamboats, bidding on choice animals at the drove yards and offering strictly fresh cuts at their stalls in downtown market houses. By the end of the Civil War, Louisville's butcher population had grown to nearly 200, employing perhaps another 150 journeymen butchers and apprentices, and nearly 80% of them were located in Butchertown.

The meat-packing business, although it suffered severe competition with the opening of Western grazing lands after the Civil War and the rise of the Chicago packers, continued to be important. In the 1850s the Beargrass Pork House, between Cabel and Webster north of Quincy, was said to be the largest in the nation. Packing was mainly a winter business in the days before refrigeration and the pork-house whistles livened the morning air on cold mornings in Butchertown, calling workers from the shotgun cottages to hurry to work so the packing could be dispatched while the cold spell was on.

Meanwhile the "boss butchers" were growing affluent and building themselves big comfortable brick homes. In 1869 the Germans organized the Metzger Verein (Butcher's Society) at Ehrmann's Halle, still standing at 1663 Story Avenue, and began sponsoring gala annual balls, street parades and picnics. John M. Letterle, "boss butcher" and City council man, was the first president of the Society and the man who used his political influence to secure a firehouse for Butchertown. It housed steam pumper #10, the "John M. Letterle," and today it is Allen House at 1419 East Washington, one of the many new businesses that is infusing Butchertown with fresh life. Directly across the street from it is St. Joseph's Roman Catholic Church, founded in 1866 to serve the large German population.

Another Butchertown resident with political influence was builder John W. Story. When the old Turnpike received its third and last name, it was named for him. Other street names in the area interestingly invoke the early republic: Washington, Franklin, Adams, Quincy, Buchanan, and Webster.

The 40-year period after the Civil War marked Butchertown's economic high-water mark. In addition to the butchers, the packing houses, tanners, coopers, and soap and tallow makers, other enterprises, began moving in. The woolen mill opened about 1864 at Frankfort and Story. Today the lot where it stood is the site of the annual Oktoberfest. A furniture factory opened in 1870 at Washington and Webster. Today it is Bakery Square.

Two breweries opened in the late 1860s, and in one the Franklin Street Brewery young John F. Oertel learned his trade, and later opened his own Butchertown Braueri on Story Avenue in 1892. Those were the years when the beer flowed freely at tree-shaded Woodland Garden, which occupied the whole block between Wenzel and Johnson, Main and Market, just south of the present district. Famed Courier-Journal editor Henry Watterson had fond memories of Woodland Garden of the late 1860s: good music, good beer, good sausage, good cheese, and a pretzel.

And it was in the late 1860s that a young Western Union telegrapher, Thomas A. Edison, boarded in the house at 729 East Washington. It is recounted that his Louisville stay was cut short when he was fired because one of his innumerable experiments ruined his boss's office rug. Now Butchertown, Inc., the neighborhood association, owns the house and hopes to restore it.

The eastern portion of what is now included in the Butchertown area contained several other industries, such as those located in the present Hadley Pottery factory. Although this was originally a candle manufactory dependent on by-products of the slaughtering process, later in the 19th century a number of other products were made there. It is believed to have been the first industrial structure in Louisville to be wired for electricity. It is rumored also to have been an underground railroad station during the Civil War. It was George and the late Mary Alice Hadley, proprietors of and designers for the pottery, who instigated the revival of the eastern part of Butchertown in the early 1960s. Their own house (now an art gallery and art center) is a rather grand one, a typical large Victorian single row-house with a tall brick facade adorned with a heavy cornice and lavish door and window trim. The cool, high-ceilinged rooms and dignified but enriched character of houses such as this one have much appeal, and represent a vernacular version of the mansions that once lined Broadway in downtown Louisville.

One of the distinctive aspects of Butchertown is that ambitious houses such as the Hadleys' are intermingled with more modest wooden ones, often of the "shotgun" type, not to mention small shops and various industrial plants; there is little consistency of scale or use, or apparent economic level. This very heterogeneity gives the area as a whole a paradoxically consistent character different from, say, Old Louisville where each street has its own scale and economic level, or Germantown to the south with its preference for "shotguns" or "hunchbacks" as they are called by older residents of the area. This architectural diversity is also reflected in the social diversity that has been maintained by the recent renewal of interest in Butchertown. The newcomers, many young professionals, have fitted-in in a remarkably harmonious manner with the remaining residents, whether with old German families or the more recent working-class residents. Thus a true neighborhood continuity has been retained and even invigorated, thanks not only to the efforts of the newcomers, but also to those of the "natives." It is not the individual buildings, their functions, or their inhabitants that give Butchertown its unique flavor: that identity is due to the willingness of a diversified group of people to live and work together to preserve and improve their neighborhood.

Note: The District nomination document does not identify a definitive boundary for the Historic District. The street names and boundary used on the accompany Map Page for Butchertown were derived from the Louisville/Jefferson County Information Consortium GIS system (lojic.org).