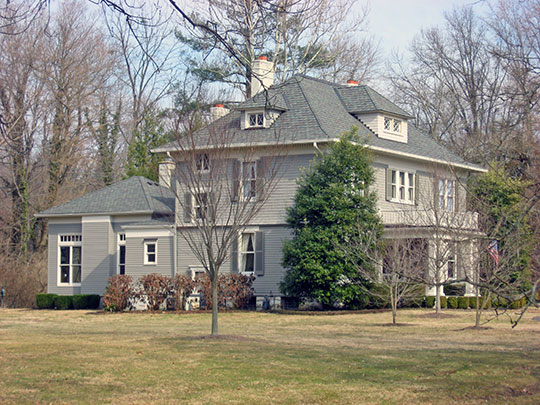 Anchorage is a residential suburb of Louisville. It was first called Hobb's Station in honor of E. D. Hobbs, president of the Louisville and Lexington Railroad. When the town was incorporated in 1876, it was renamed for the estate of Captain J. W. Goslee, a steamboat pilot, who, when he retired and built his home at Hobb's State, said he wished to "anchor there for life." An anchor on the lawn of the Louisville and Nashville Railroad station is said to have been presented to the town by Captain Goslee. The anchor, surmounted with a gilded eagle, was used for many years as a fire alarm. The alarm was sounded by striking the anchor with an iron instrument.

In 1916 the offices of the Southern Pacific Railroad were moved to Anchorage, and the little village suddenly found itself the home office of a corporation controlling 13,000 miles of track, not one foot of which was in Kentucky. When corporation laws in the State were made more stringent, the railway offices moved away.

‡ Prior to the Louisville City/Jefferson County merger (Louisville Metro) in 2003, Anchorage was one of approximately 80 independent cities. Subsequent to the merger, these cities share some aspects of governance through various interlocal agreements.