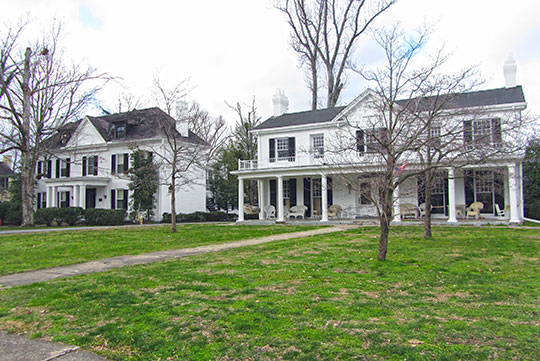 Danville, established as Crow's Station by the Virginia Legislature in 1784, predates the county. A series of conventions held at Constitution Square in 1792 determined much of the form of Kentucky's government. Twelve conventions were held on the Square which formed the eastern boundary of the original town plat of Danville. Laid out in 1785, the original town plat contained 63 lots located within the three blocks west of the Square along what is now known as Main Street, Walnut Street, and Green Street. The Square served as the major commercial, civic, and religious center of town until the early 19th century when commercial activities abandoned the log structures on the Square for the brick and frame structures being built along Main Street. The topography of the town center was relatively flat and offered no resistance to development. The only water body near the town was the Town Spring Branch east of the Square. As additional areas were needed, the Danville Board of Trustees acquired farmland and subdivided into a grid pattern similar to the original plat.

Danville's prestige as a governmental, educational, and religious center attracted the Transylvania Academy, the Kentucky Asylum for the Deaf, and Centre College during the first decades of the 19th century.

In the 1830s the town lands expanded again when property once owned by Daniel McIlvoy came up for sale. The street pattern was extended north of Main Street, but the land was sold in large tracts instead of the lot pattern favored by the trustees. During this time period, the major parks were the original town square, the Presbyterian burying ground (now known as McDowell Park), and the Centre College Campus.

Old Centre and many other important civic structures were designed and built by the Russels in the first half of the 19th century. Their work in brick is usually distinguished by massive columned porticos even in the residential designs.

Danville became the county seat of Boyle County in 1841 when the county was formed from parts of Lincoln and Mercer. A devastating fire in 1860 started during a George Washington's Birthday celebration and destroyed most of the business district. Danville was not occupied by either side during the Civil War, but its churches and courthouse were used as hospitals after the Battle of Perryville.

The Southern Railroad reached Danville in 1877 and provided a major stimulus for the growth of the downtown. Danville became an important link in a transportation network that linked the North and the South. The Italianate architecture of the central business district testifies to the prosperity of the times with ornately detailed two and three story brick buildings.

The area to the west of the original Public Square was not developed until the 1890s when Main Street was extended. Other areas of town had gained their density through the infill of later houses on the big lots of the earlier houses. The East Main section was built virtually totally during one time period and the houses are variations of similar styles and floor patterns. During the late 19th century, Lexington Avenue and Maple Avenue were developed as major transportation corridors connecting Danville to other towns. Later development on these streets retained the setbacks and stylistic quality despite the heavy traffic.