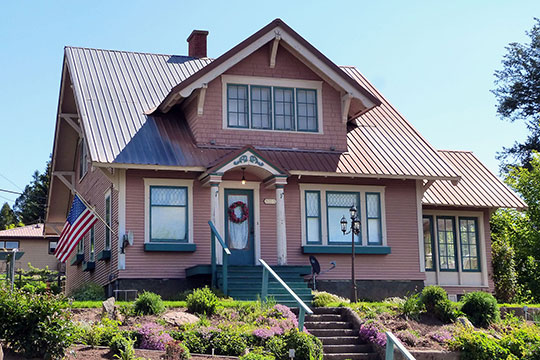 Latah's first recorded inhabitants were the Nez Perce Indians who arrived in the area about 1200 A.D. The Greater Nez Perce Trail crossed the County from north to south. The Nez Perce would use this trail to meet with the Coeur d' Alene Tribe to the north. Many other trails led to the flat land along Paradise Creek. The Nez Perce migrated to Latah County in the spring and summer to dig camas and biscuit root, to pick huckleberries, fish and hunt. During the winter they lived in camps along the Snake and Clearwater Rivers where the climate was milder.

The name Latah evolved from two Nez Perce words, La-Kah and Tah-ol. La-Kah refers to the large trees in the area and Tah-ol to the pestles used to grind the camas roots. Latah is derived by combining the first syllables of these Nez Perce words, to mean "pine and pestle place."

In the 1830s, the Reverend Henry Spaulding and Father Cataldo came to the area to preach the gospel to the Nez Perce. In 1885, Isaac I. Stevens and his surveying party camped overnight at a spring south of Moscow, recording his impressions of the country. In the 1860s, gold was discovered near Orofino and later in Crumarine Creek on Moscow Mountain. The miners created a need for supplies, and stage stops at places like Woodfell and gardening communities like Viola supplied their needs. Later, many prospectors turned to ranching and farming. Viola was the first agricultural settlement followed by Genesee and Moscow in the early 1870s. The need for sawmills and extensions of the railroads into Latah County created new towns or prompted the rapid growth of small settlements like Huffs Gulch. Originally a part of Nez Perce County, Latah County was created by an Act of Congress in 1888. The University of Idaho was established in 1889, leading to a boom in Moscow and Latah County. The recent and on-going celebrations of community centennials has resulted in new interpretations and histories of Latah County and its communities. The celebrations have also resulted in expanding residents' consciousness about their heritage.

Latah County contains many diverse regions with different histories. The north and northeastern parts were economically shaped by mining, logging, tourism, and timber claims. Although many homesteaders, including numerous immigrants from Scandinavia, took up farming, most farms were small and did not prosper. The south and southwestern parts of the county, which are included in the Palouse region, have large farms, some of which have been in one family for generations. Logging had a great impact on the area, with the Potlatch Lumber Company owning a great deal of land in Latah County. The town of Potlatch, built by the Company in 1905 and operated by it until the 1950s, is one of the few true examples of a company town in the west. The influence the Company had in this area is also reflected in the towns of Deary and Harvard and the depots that once stood along the route of the Washington, Idaho, and Montana railway. The Potlatch Company built this railroad to move logs to its large mill at Potlatch.

The rich soil of the Palouse hills is legendary. Farming, which began with diversified crops, is now mainly confined to wheat, dry pea and lentil crops. Genesee and Moscow are two centers of these rich farm lands.

Kendrick and Juliaetta, located along the Potlatch River, were important trade centers for the mines and were at one time famous for their production of fruits and vegetables. That industry has largely disappeared.