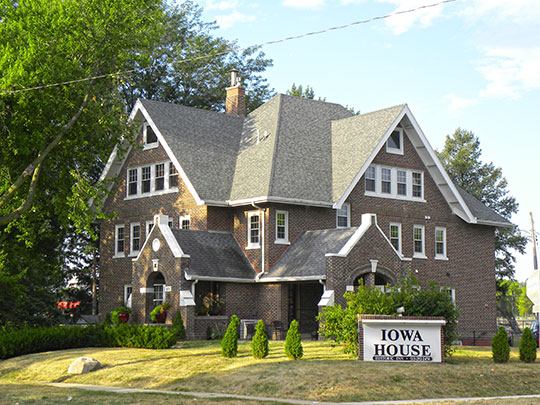 The City of Ames is located in the west central portion of Story County. Ames is situated within the watersheds of the Skunk River, which flows on the eastern edge of the community, and Squaw Creek, which bisects the community into two sections known as "Ames" and "West Ames" (also called "Fourth Ward"). In 1859, the State of Iowa decided to locate an agricultural college on land west of Squaw Creek; and, after fits and starts, the first unit of Old Main was completed in 1868 to accommodate this Land Grant institution. The Cedar Rapids & Missouri Rail Road laid out the village of Ames in 1864 as a depot station along its east-west line across Iowa. The 1864 date for this MPD reflects this fact. The 1941 date reflects the City's boundaries before major expansion, which occurred following World War II.

At all times, the college community has played a critical role in the development of Ames. At the turn of the 20th century, "Ames" and the college were synonymous for most Iowans. The school's athletic teams bore the word "Ames" on their uniforms, and the popular mind associated the college and the town as a single entity.

During the early years, the college operated like a farm, remaining largely separate and distinct from the town both by geography and by inclination. Faculty, staff, and students lived together as a semi-self-sufficient community. Occasional forays into town sometimes punctuated their lives. As the agricultural college grew, the connections between town and gown expanded. When public transportation linked West Ames and Ames in the 1890s, the college began to meld into the broader community, boost the local economy, and contribute to civic life. In the early 20th century, the college achieved national renown as an institution of agricultural, scientific, and engineering repute. This acted like a magnet to attract other institutions to Ames. The Iowa Department of Transportation, first based in Ames in 1904 as part of the college and then established in 1913 as a separate entity as the Iowa State Highway Commission, is a good example.

Although many towns in Iowa have declined in population since World War II, Ames has bucked this trend and flourished. The presence of Iowa State University, the Iowa Department of Transportation, the National Animal Disease Center of the U.S. Department of Agriculture, and other government and private bodies engaged in scientific research and service provides opportunities for employment, which support a healthy local economy.

Interstate 35 provides a convenient vehicular link between Ames and the capital city of Des Moines. This allows some Ames residents to commute to Des Moines and vice-versa. This corridor also facilitates marketing and the exchange of goods, services, and ideas. Local leaders in Ames have also encouraged resident Iowa State students to follow federal guidelines and claim Ames as their rightful domicile so that the city's population might reach 50,000, an important numerical threshold for eligibility for certain federal government programs. These efforts met success in the federal census of 2000, when the Bureau of the Census set the city's population at 50,731.