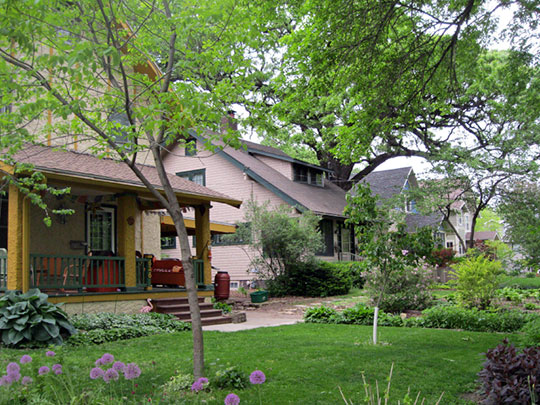 The Greenwood Park Plats Historic District was listed on the National Register of Historic Places in 2013. Portions of this web page were adapted from a copy of the original nomination document. [‡]

The residential area of the City of Des Moines expanded in every direction, beginning in the early 1880s once topographical obstacles were surmounted to allow for the extension of streetcar service and infrastructure (water and sewer). A principal model that drove and influenced this expansion was the magnet suburb. This model entailed the establishment of an out-lying self-incorporated town. Commonly these towns also possessed a supplementary "magnet" usually in the form of a private college. This growth model tended to produce a more substantial residential architecture. Even today, Des Moines' "working class" neighborhoods predominate to the south and east, areas that lacked this model of urban expansion. The town of Greenwood Park governed municipal growth to the west, along what is now Grand Avenue. There was no "Greenwood Park College" but there was Brown's Park, a private park that hosted the Iowa State Fair from 1879-1885. It reverted at least in part to park use and was platted and marketed as a residential plat, was built up beginning ca. 1910 and was largely infilled by the mid-1920s. The magnet suburb model assumed the form of a combination of attractions that combined to draw the city westward. These included the aforementioned State Fair, St. Joseph's School (1888), Greenwood Park (the city park, 1894), the establishment of Valley Junction to the west (early 1890s), and Ingersoll Park (1900-1912). The several public and private parks followed the streetcar-amusement park model that was employed by mass transit companies nationwide. Under this model a suburban attraction, usually owned by the company, provided a seasonal revenue stream that could offset the cost of running trackage across otherwise uninhabited territory. Over time the undeveloped area was platted and built up and the attraction became fiscally redundant (and the attraction was relocated once again as the land it occupied became too expensive to continue as a seasonal undertaking). Greenwood Park (the plat) constituted the initial substantial gridded platting where residential development, lying directly west of the city, began. The plat was well west of the city's west boundary (28th Street) when Greenwood and the other suburban towns were annexed in 1889. Consequently, residential development was extended from this initial plat both to the north, west and to the east, towards the city. Greenwood Park was the cause and effect of municipal growth to the west.

Des Moines expanded first to the northwest during the early 1880s in response to the establishment of Drake University in University Place, another incorporated suburban town. Following that same model, growth ensuing residential infill actually backtracked to the city proper. Greenwood Park represents the first substantial westward residential movement of the city of Des Moines, having its origin in the self-incorporated town of Greenwood Park (1881). Brown's Park, established in 1879, was the precursor of Greenwood Park, was a west-end recreational park and attraction point. The park emerged beyond that service level as the site of Iowa's first quasi-permanently located state fair grounds from 1879 through 1885. The Iowa State Fair evolved in response to changing trends, expanded in scale and size, and matured as a statewide institution while at this location. This initial and very successful period of development and expansion resulted in the state's purchase of permanent East Des Moines grounds and the lessons learned directly influenced the future development of the state fair.

After the fair departed, Brown's Park continued to serve as a recreational venue despite the fact that it had been platted and offered for sale. Probably the latter involved the south part of the plat while the racetrack and north part of the park continued to function as a park and a few resources call it Elmwood Park. For undetermined reasons, but probably as a result of the national economic recession of the early 1890s, the area failed to develop for residential use until the years 1900-1917. The streetcar arrived in 1889. The southern half of the district contains the earliest core of houses and these are the most substantial. Associated Greenwood Park developments further encouraged westward growth. These included the establishment of Greenwood Park proper, Ingersoll Park (1900), a combination amusement and summer theater venue, the establishment of the Illinois Central Railroad division shops at what became Valley Junction, a mile further southwest, and the establishment of area churches and schools during the post-World War I years.

The town of Greenwood Park is bounded by 42nd Street (west), Center (north), 28th (east) and the Raccoon River (south) and comprises some 1,000 acres. This west-end community had small-scale yet upper class origins during the late 1870s. By the next year, 25 residents petitioned for incorporation and a referendum followed on January 15, 1881. The resulting vote, with slightly fewer voters, produced a unanimous 22-vote plurality. A public hearing followed on February 5 and the town was incorporated on February 11. From the start, early residences lined Grand Avenue, or Sycamore Street, or Greenwood Avenue as it was known to the west of the city limits (28th Street). These early residents occupied stately large homes or mansions that were in turn sited on large tracts.

Greenwood Park was incorporated as a town in 1881. Wealthy Des Moines residents acted to obtain control of their elevated and bucolic enclave that lay west of the city and well away from the city's smoke and congestion. The very small population was made up of upscale Greenwood Avenue residents who clustered just west of the city's west boundary (28th Street), where the avenue was known as Greenwood. Those residents were all prominent city leaders so their interests naturally aligned with the city.

Municipal annexation took place in 1890 after the General Assembly passed the necessary enabling legislation, and the city assumed the bonded debt of each annexed independent. Capital Park and North Des Moines were the most strident in their opposition to the idea. There is no evidence that Greenwood Park opposed to the idea of being gobbled up and it is key to remember that the Greenwood Park School District remained independent.