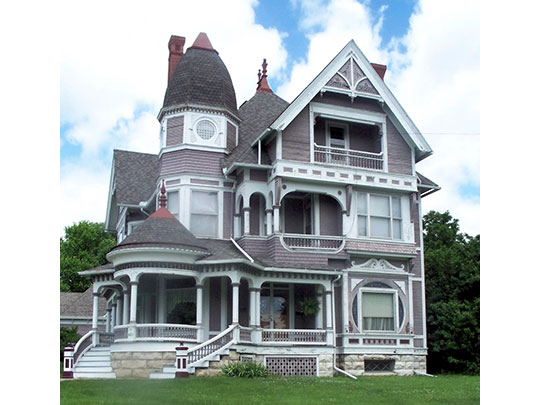 Fairfield was so named by its founders because of the natural beauty of the site. Parsons College was founded here in 1875 under the Parsons Endowment Fund provided in the will of Lewis P. Parsons [1793-1855] whose name the school bears. It is controlled by the Presbyterian Church and has an annual enrollment of about 400. The first class was graduated in 1880. The campus now contains about 65 acres, mostly wooded.

In 1854 the first Iowa State Fair was held here in October. It was promoted by the Iowa Agricultural Society, a group of Jefferson County men who organized for "recognition of agricultural rights." The Fairfield organization was the first of its kind in the State, but soon had numerous followers.

On the day of the first fair the little town was packed; hundreds of visitors arrived the day before the opening, walking, riding horseback and using all types of vehicles; there were several two-wheeled carts drawn by ponderous oxen, and even covered wagons in which families planned to camp during the fair. Some frontiersmen wore long pistols in their belts—both for protection and as ornaments. Interest centered on the display of farm implements gaining favor at the time—plows, harrows, corn planters, reapers, threshing machines, fanning mills, and corn crushers. Prison-made goods were also displayed, in addition to miscellaneous floral paintings, snake collections, fur hats, cloth and wallpaper. Prizes were offered for a team of oxen of not less than three yokes, for grain cradles and the like. Entertainment included horseback riding feats by 18 women, horses and riders being bedecked with colored ribbons. The fair, though not a financial success, set a precedent.

Howard Park and Central Park have beautiful older trees, shrubbery and green lawns. Central Park was designated as a public square in 1839. The 11 acre Old Settlers' Park hosts the annual Old Settlers' Reunion at its log house, the Bonifield Cabin (ca. 1836) in front of which is the grave of the first white settler in Jefferson County.

Fairfield is one of the four Iowa cities having a State Police Broadcasting Station.