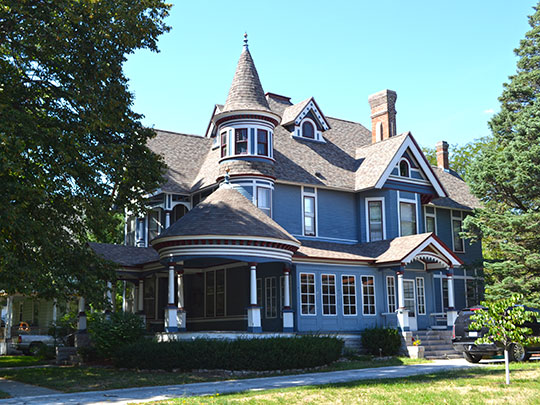 Originally named Newcastle, it was changed to Webster City when it was named county seat of the newly created Hamilton County in 1857.

Webster City, seat of Hamilton County, was settled in 1850 by Wilson C. Brewer and named in 1856 for the owner of a stage line that extended between Belmond and Fort Dodge. On the banks of the Boone River is Kendall Young Park, a 70-acre tract of rolling woodland named for the founder of the Webster City library.

A bronze tablet in the courthouse commemorates the pioneers who joined the relief expedition sent to aid the settlers in northern Iowa in March, 1857, following the Spirit Lake Massacre.

In the Wilson Brewer Memorial Park are two adjoining log cabins on the old Wilson Brewer place. The first cabin was erected in 1850; the second, built in 1856, was brought here from another site. On display are tools, field implements, cooking utensils, home furnishings, and primitive manufacturing machinery that belonged to Hamilton County pioneers.