Photo: Nutwood, ca. 1833, North of Big Springs Road, LaGrange, GA. Nutwood was designed by architect Collin Rogers and built in 1833 by Joel Dortch Newsom. The house stands on what was then the Newsom family plantation, east of LaGrange. Listed on the National Register of Historic Places in 1974. Photographed by User:Rivers Langley (own work), 2012, [cc-by-3.0 (creativecommons.org/licenses/by/3.0)], via Wikimedia Commons, accessed January, 2014. 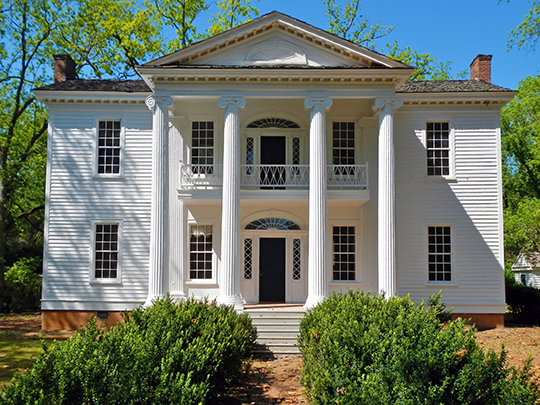 LaGrange, seat of Troup County, is known for both its textile manufacturing and for the excellence of its architecture. Here the modern, industrial South has been superimposed upon the Old South of the plantation era without destroying the charm of the classically designed houses, luxuriant gardens, and wealth of magnolias, water oaks, and elms.

In the early part of the 19th century LaGrange was a settlement of log cabins. These were gradually replaced by larger houses until, by the second quarter of the century, there were many commodious dwellings, with broad, columned porches. On his visit to America in 1825 the Marquis de La Fayette, spending two weeks in Georgia as the guest of Governor George M. Troup, was impressed with the similarity of the Creek lands of western Georgia to his own estate, La Grange, in France. In his honor the town, incorporated in 1828 as the county seat, was called LaGrange.

Tis section of Georgia flourished with the growth of its cotton plantations until the War between the States. So loyal to the Confederacy were the citizens that almost every man marched to battle. The LaGrange women, according to legend, organized themselves into a military company named Nancy Hart for the celebrated Revolutionary heroine. It is said that in 1865, when the defenseless city was invaded by Wilson's Raiders, the Nancy Harts in their heterogeneous costumes marched out to meet them, and so impressed their colonel, who by coincidence was named La Grange, that he marched on without burning the city. LaGrange remained a small, old-fashioned town until the late 19th century when the establishment of large textile mills caused the city to grow rapidly.

Through the city the highway follows Broad Street, which is the principal residential street and is bordered with many fine old houses.