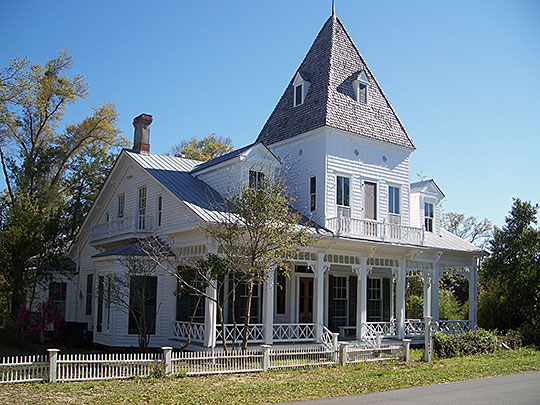 Milton, seat of Santa Rosa County, was founded on the Blackwater River as a trading post in 1825. Like other north Florida communities of Territorial days, the town was built around a courthouse square. For many years the village could be reached only by river schooner or by stagecoach along the Geneva-Pensacola road. A correspondent of the Baltimore Sun wrote in 1851, "Milton has three sawmills running 99 saws, and three confectionaries, one known as 'Shades,' where home folk are wont to retire in the morning to partake of ice juleps ... We have a moral society which bids a hearty welcome to the good and virtuous that come among us, but woe to evil doers ... Our young ladies are beautiful, our wives lovely."

Before the War between the States thousands of bales of cotton and much wool from near-by plantations were brought here by mule teams, shipped down the river to Pensacola, and across the Gulf to northern points. Milton remains an important cotton-ginning center, and also has lumber mills, barrel-stave factories, and naval-stores plants. A block south of the bridge spanning the river is the site of an old ferry crossing, and near by are small shipbuilding yards and stores supplying fishermen.