Photo: House in the Dixieland Historic District, Lakeland, Florida. The historic district was listed on the National Register of Historic Places in 1994. Photographed by User:Ebyabe (own work), 2010, [cc-by-3.0 (creativecommons.org/licenses/by/3.0)], via Wikimedia Commons, accessed April, 2013. 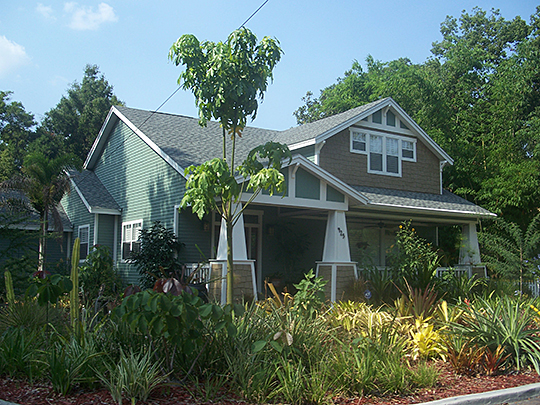 Lakeland, Florida was incorporated January 1, 1885. The town was founded by Abraham Munn, who purchased 80 acres of land in what is now downtown Lakeland in 1882 and platted the land for the town in 1884. Munn was a resident of Louisville, Kentucky. Among the names considered (and rejected) for the town by its residents were Munnville, Red Bug and Rome City. It is reassuring that farsightedness prevailed in the selection of the name.

For a short time, Lakeland had a rival on the south side of Lake Parker, the largest lake in the city. That town was Acton. It had a church before Lakeland did, and more importantly, a railroad depot. Under mysterious circumstances the depot burned, and shortly thereafter a larger, modern structure was built in Lakeland. Acton began to decline and was gone by 1906. By the mid-1890's some 25 trains were stopping in Lakeland each day. Because of the excellent railroad service, progressive outlook, attractive location and elevation (227 feet), the community grew and prospered.

In 1885 the Tremont Hotel, said to have been the best hotel in South Florida at that time, was built by Munn. It remained Lakeland's finest hostelry for years. It was moved in 1923 to make way for the construction of the Terrace Hotel, which still stands today.

City fathers knew how to deal with crime. In 1886 they passed an ordinance prohibiting "straggling around" the town. The mayor's report for the second quarter of that year shows 36 arrests; offenses included fighting, gambling, boisterous cursing and swearing, public drinking, lewd conduct, discharging firearms, sanitary violation, petty larceny and peddling without a license. The first jail was called the McDermott House — named after its first occupant.

In 1887 nursery owner Ed Tison claimed to have originated the Marsh Seedless Grapefruit from cuttings on a tree growing on property of J. H. Hancock, north of Lakeland. About the same time he perfected this fruit, he sold his nurseries to C .M. Marsh, who gave his name to the new variety of the citrus family.