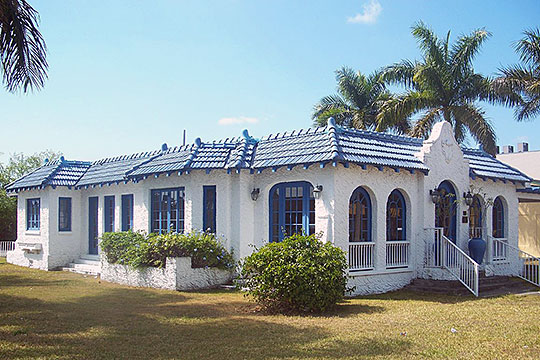 As the Florida Coast Railroad extended south during the early 1900s, small communities began to develop. A homestead claim was filed in 1903 by William J. Krome, a railroad worker, which included the area that would become the City of Homestead.

The settlement of the town began shortly before the railroad arrived. In 1903 William Alfred King, a section foreman for the Florida East Coast Railroad, moved his work crew south from Perrine to the Homestead area. A small group consisting of King and a dozen or so black workmen from Nassau built the first permanent buildings including a depot, offices and homes for the station agent and section foreman. The workers lived in tents or portable buildings that moved along the rail lines with the camp. King remained in Homestead after the railroad was completed and became one of the area's first tomato farmers.

The developing area had commonly been called "Homestead Country" by early settlers in reference to the recently arrived homesteaders. Engineering maps also identified the location as "Homestead." The name "Homestead" became official on January 15, 1904, when J. E. Ingraham, an FEC Railroad vice president received Flagler's permission to use the name on company printed material. In June 1904, before the railroad was completed, the Town of Homestead was laid out by John S. Fredericks, an employee of the FEC Railroad. The Model Land Company, which managed Flagler's landholdings, created a subdivision west of the small town for future development. Homestead became the business center for the surrounding area, known as the Redland District because of the color of its clay soil. The Redland District was noted for its groves of grapefruit, oranges, and avocados.

The last rail on the twenty-eight mile FEC Railroad extension from Miami to Homestead was laid on July 31, 1904. In reporting the event, the Miami Metropolis noted that Homestead was located "in the midst of the farming section of the lower country. The land is fertile and valuable and the town has a promising future." As the Model Land Company promoted the area, settlers arrived and the importance of agriculture grew to form the economic base for the new town.

The Key West Extension of the FEC Railroad was launched from Homestead in May 1905. The railroad company erected a great water plant and train-loads of water left Homestead daily for distribution further south. Although the labor force working on the extension was small at first, by February 1906, four thousand men were employed on the project, resulting in rapid growth and changes for Homestead.

As the population of Homestead grew, the need for social institutions also increased, churches and schools were an integral part of the early development of Homestead. By 1907, enough children were living in Homestead to fulfill Dade County's requirements for a school. Land for a school building was provided by Flagler's Model Land Company. The school was enlarged in 1909, but by 1913 it was necessary to build a new school, known today as the Neva King Cooper School (NR 1985). Both the Baptist and Methodist congregations were established in 1909. They met in homes and the local school building until permanent buildings could be constructed.

The Bank of Homestead opened in May 1912, on the corner of Mowry Street and Krome Avenue, with W.D. Home serving as president. Horne had also opened the first boarding house in Homestead and had served as the community's first postmaster. Horne also formed Homestead Mercantile with Henry Booker, and located it in a new building on Krome Avenue. That year, Dr. John B. Tower arrived in the area to bring medical care to the town's fifty families.

Like many small towns in South Florida, Homestead's early development was dominated by the FEC Railroad. Its name, location, and town plan were all a result of Flagler's influence and his push to move the railroad to Key West. On the eve of incorporation, Homestead was growing in population and poised for the coming Boom Years of the 1920s.

As Homestead moved toward incorporation and the Boom Times of the 1920s, development expanded west of the FEC Railroad to Krome Avenue. In 1913 the Town of Homestead was incorporated with a population of 121 people, and 28 registered voters. R. E. Tatum, a local real estate agent, was the town's first mayor. Tatum's family was involved in developing large tracts of land into subdivisions throughout Dade County. In a speech recorded in The Miami Metropolis, Tatum expressed his pride in becoming the first mayor and noted that "People are flocking to our gates, buying our lots and erecting buildings. The future for this town is very bright and I am sure that we have taken a wise step in forming this incorporation." J. U. Free, J. D. Reed, John Cockran, and W. J. Tweedell were the first elected councilmen.