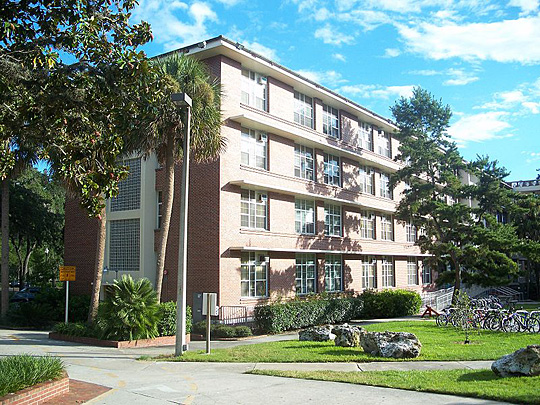 The Gainesville area was known as Potano Province when De Soto marched through it in 1539; the name was changed to Alachua (Indian word for jug) when the Creek Indians took possession upon the English acquisition of Florida in 1763. A white settlement known as Hog Town grew up around a trading post established here in 1830, and was named Gainesville in 1853 for General Edmund P. Gaines, a Seminole War leader. Families from Georgia, Alabama, North Carolina and South Carolina came to lay out large cotton plantations. Completion of the Yulee railroad across the State in the early 1860s stimulated development. A post office, abolished during the Civil War, was re-established in 1866; stagecoach service was opened with Ocala. As transportation facilities improved, truck farming and citrus culture grew in importance.

Gainesville became an educational center with the establishment in 1867 of an academy, the nucleus of the State Seminary for the region east of the Suwanee. Not until 1905, however, were State-supported schools for white males merged and consolidated with the University of Florida. The gala event of the university year is Homecoming Day, when graduates of all ages return to their Alma Mater for the season's important football game.

Gainesville lies on the northern fringe of the ridge section, midway between the Atlantic Ocean and the Gulf of Mexico. For nine months of the year it is a typical college town, with business, sports, and social activities centering around the pine-shaded campus. The business district clusters about a red brick courthouse of the 1850s; in the residential areas many of the large frame houses, set back in spacious lawns, date from the Civil War Reconstruction days. Gainesville's existence and development are linked with Florida's pioneer railroad history, and trains are still routed along the center of Main Street.

The Black settlement northwest and south of the business section has its own mercantile establishments, schools and churches. Many religious meetings are held in tents, barns and abandoned houses, and sometimes continue for days, during which worshipers stroll in and out while the congregation and preachers shout and sing above the din of an impoverished orchestra. Most of the Blacks are employed in domestic service, or in nearby lumber and turpentine camps.

Naval stores and sawmills are the major support of the Gainesville area, although it ranks high in truck farming, with early Irish potatoes and watermelons as its leading products. Light-wrapper and cigarette tobaccos are cultivated, and several large nurseries propagate subtropical plants for the State and northern markets.

Two plants for the extraction of Tung Oil in the vicinity of Gainesville serve growers in Florida and parts of southern Georgia and eastern Alabama.