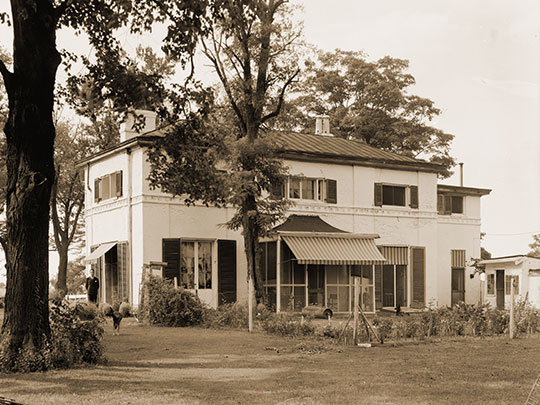 Swanwyck was listed on the National Register of Historic Places in 1977. The listing shows the building located on Landers Lane, however, today, the front of the building (much modified since 1977 and no longer recognizable as the "same" structure) faces Linstone Avenue. Portions of the content on this web page were adapted from a copy of the original nomination document. [1]

Swanwyck, a product of the Regency period, is a two-story, three-bay structure, covered by stucco laid over brick and encircled by an elaborate belt course. Lower wings of more recent periods have been added to the north and west.

Framed by rectangular lights and covered by a portico, the dual-door center entry permits access to a center hall. The hall, backed by an open-hung stair, connects with rooms to the north and south within a basic rectangle and with one to the west beyond the stair. The south room features a marble-faced mantel, panelled closets into the side of the chimney breast, and dual doors giving egress to the south. The rear, or west, room is panelled below the chair rail and contains a fireplace with marble-faced opening; again, dual doors open to the outside. The north room has been altered by the installation of kitchen facilities. All interior portals on the first floor are arched.

The second floor arrangement is patterned on the first. However, the center hall has been obstructed by a partition enclosing the stairway and closets at the east end of the hall. In addition, the north room has been divided into a hallway, bath, and bedroom.

In the basement, the foundation walls are of stone rubble construction, with brick supporting walls laid in common bond. One fireplace remains at the base of the south chimney. The entire structure is hip-roofed with ceramic roofing tiles.

The staircase detailing, the pine floors, the plaster cornices in the main rooms, the wainscot, and most of the other interior details survive intact. About three acres of the original farm remain undeveloped to serve as a setting.

The only major changes to the main house are the conversion of some French doors into windows and the removal of the rear porch. When the French doors were removed, their interior trim was left unaltered. There are ample records to allow an adequate restoration of the porch.

Swanwyck has been called one of the most distinguished examples of Regency domestic architecture in the country. Its designer, Peter Bauduy, was an amateur architect, preparing a house for his newly-married daughter.

Peter Bauduy was born Pierre de Bauduy de Bellevue, in Bordeaux, France, in June of 1769. As a child he was taken to Santo Domingo, but returned to France to enter the military service at age 17. He resigned his commission as lieutenant after the fall of the Bastile and returned to Santo Domingo. In 1790, Bauduy married Juliette Le Bretton des Chapelles, a schoolmate of Napoleon's Empress Josephine.

Wilmington became Bauduy's home after a slave insurrection in 1791 caused him to flee Santo Domingo. Peter Bauduy anglicized his name at the time he applied for citizenship.

Bauduy, as a leader of the French community in Wilmington, met Eleuthere Irenee du Pont in 1801, and joined in his business plans. Bauduy arranged for a purchase of land along the Brandywine in 1801 from Jacob Broom, a signer of the Constitution. Du Pont returned the favor by providing Bauduy with stock to start a flock of merino sheep. The two men cooperated in operating a woolen mill on the Brandywine in 1811; the next New Year's Day, President Madison dressed in a suit fashioned from the first piece of cloth from their mill.

Bauduy's prosperity led him to purchase an estate south of Wilmington in 1805. Four years later he built his home, Eden Park. Cora Marie Bauduy married Jean Pierre Garesche in 1813. Between that year and 1819, her father designed Swanwyck for her. Wilmington lost a valuable citizen in 1819 when Peter Bauduy left for Cuba.