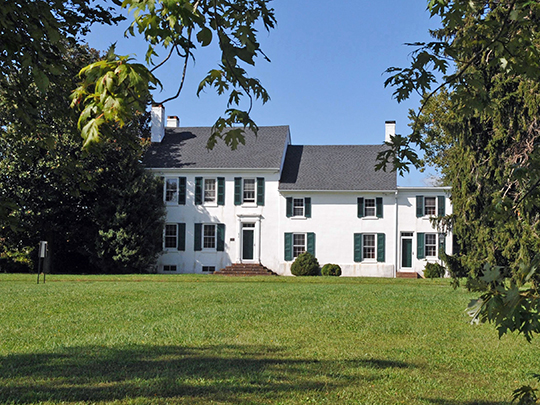 Dover became the capitol of Delaware in 1777.

Dover's significance lies in its function as the seat of state and county government, in its position as a center of commerce and industry in Kent County, in the variety and richness of its architecture, and in the manner in which the town was developed. The area encompassed in the Victorian Dover Historic District reflects the area of growth and development from the northern boundary of the colonial town; along the Kings Road, one of the earliest areas of development, to the St. Jones; taking in the areas of Dover's subdivisions, which were developed by the end of the First World War; and including all of Dover's nineteenth-century commercial/industrial district to the railroad. The history of Dover's growth in this period provides some interesting contrasts. The progressiveness of a few of its citizens made Dover the social and cultural center of lower Delaware; however, its geographical isolation occasioned slower growth and less major industrial development, causing the overall character of the town to change very little until well into this century.

From 1683, when William Penn laid out his plan for a town to be called Dover and to serve as a seat of government for Kent County, "planners" have been in control of Dover's development. The first evidence of Dover as a planned community is revealed in a 1722 plot of the town, which shows it to be completely subdivided into lots. Around the rectangular-shaped colonial town, which had North, South, East and West Streets as its boundaries, was farmland. Early expansion of Dover was to the north and, to a lesser extent, to the west. The marshy lands to the south and east of the town did not lend themselves to building. The earliest expansion northward took place among the Kings Highway (now South State Street). This took place just after the Revolution when Dover, as the new state capitol, was going through a period of expansion. The first official expansion of the town's limits did not take place until 1829, when Dover received its charter. The incorporated town now extended northward to near Reed Street, but there were still few houses above North Street when a plot of the area was made in 1851. Farm and woodland, only, existed above Mechanic Street — the old Horsehead Road (presently Loockerman Street). The lands shown in this plot had belonged to Nicholas Loockerman, the last Doverite to carry that name. This land descended to his nephew, Reverend Thomas B. Bradford. Bradford, a clergyman and successful businessman, must be considered Dover's greatest developer. Four subdivisions of Dover — Bradford City (1852), North Bradford City (1865), Silver Lake City (1869), and an addition to Silver Lake City (1870) — were laid out and developed by Reverend Bradford. Reverend Bradford's success in the field of land development encouraged other Dover landowners to divide their land and create new additions. Among these developers were Joseph P. Comegys (1852, 1855), Thomas Slaughter (1868, 1869, 1874), J. Alexander Fulton (1869, 1876), and Caleb S. Pennewill (1877).

Dover's history reflects not only the foresight of its citizens in terms of town planning, but also in civic improvements. One of the first actions of the newly incorporated town in 1829 was the laying of pavement and gutters, and the placement of wells and pumps at appropriate locations which, along with buckets and ladders, were used for the fighting of fires. In 1882, the establishment of the waterworks made the above system obsolete. Thirteen thousand feet of water main was laid and twenty-six hydrants installed. The next year the Bobbins Hose Company, Dover's volunteer fire company, was established. It is the second oldest fire company in the state; only Wilmington preceded it. Dover's Gas Works were established in the 1850's. It made possible the establishment of Dover's only major nineteenth-century industry, the Richardson & Robbins Canning Company.

In the 1840's, A. B. Richardson opened a tin and stove store on Loockerman Street. He experimented with the process of canning to preserve food. In 1855, Richardson began his highly successful partnership with James W. Robbins, establishing a business under their names, which put 600 cans of food on the market the next year. By the time of the Civil War, 40,000 cans a year were being prepared. When the Union Army furnished the canned goods to their troops, the success of the canning venture was assured. Growth was rapid after the war. The plant became Dover's major employer and the Richardson family, who continued to operate it after Mr. Robbin's death in 1876, became one of the most influential families in the community. One of their greatest contributions was the construction of the Richardson Hotel. This hotel, constructed in 1882 on the site of their first cannery, had 68 rooms with steam heat, gas light, and other modern conveniences. It was thought to be the finest hotel on the peninsula. The cannery's second plant, built in 1880, continued in active use for nearly a century. The Richardson family sold their interest in the company in 1959 to the William Underwood Company, the oldest food canning establishment in the nation. They closed the plant in 1976. Richardson & Robbins was significant to the state as its first cannery but, more importantly, to Dover, as it provided a way to market the agricultural products grown on the surrounding farmland. Millions of dollars in Kent County fruits, vegetables, and poultry were canned and shipped from this plant.