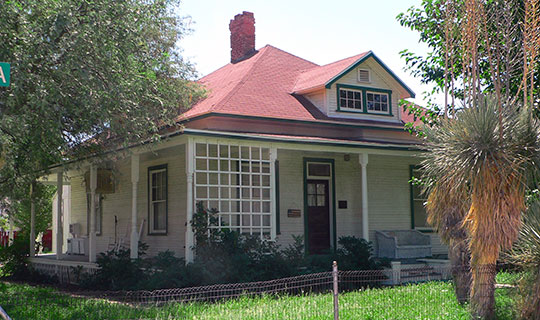 Benson's development dates from the arrival of the Southern Pacific Railroad in 1880. Benson was the only town in the area with transcontinental connections and the introduction of regular train service brought rapid growth. The railroad is considered to have been directly responsible for the town's economic growth in three important ways. First, Benson served as the passenger clearing house for southeastern Arizona from which passengers could take stage coaches directly to Tombstone or other regional towns. Second, employment and trade for Benson were produced by the mining operations in the towns of Clifton and Bisbee and the mining districts in the Galliuro and Rincon mountains. Mining products were sent via wagon train to Benson, where they were shipped by rail. Third, Benson became a "hub city" with the arrival of two additional railroads, the New Mexico and Arizona Railroad in 1882 and the Arizona Southeastern Railroad Company in 1894. The Arizona Southeastern Railroad Company, financed by the Copper Queen Consolidated Mining Company in Bisbee in 1888, was constructed to ship freight to the Southern Pacific connection at Benson. At this time Benson was unique as the only point in Arizona served by three independent railroad lines. [1]