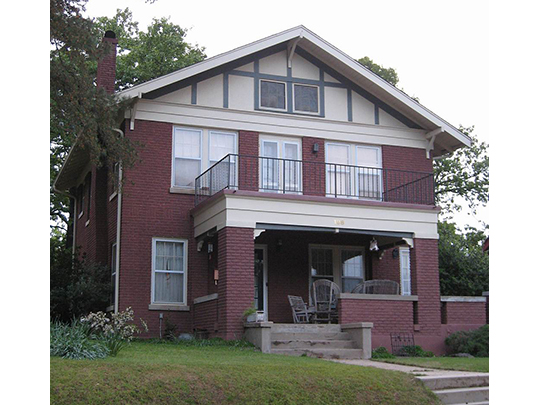 The Capitol View Neighborhood Historic District [‡] was listed on the National Register of Historic Places in 2018.

The Capitol View Neighborhood Historic District is a residential area situated in the hills west and north of the Arkansas State Capitol. Spectacular views of the Arkansas River and the Arkansas State Capitol from wooded lots were, no doubt, the principal attraction of the area to developers and buyers. The district contains portions of ten additions to the city of Little Rock platted during the period from the late nineteenth century to the mid 1920s. The Capitol View neighborhood is almost exclusively residential, largely comprised of single family homes with a few duplexes and four historic and one non-historic multi-unit apartment buildings. There are no historic churches, schools, or fire stations located in the neighborhood.

Additions as platted ran from both south to north and east to west; however, construction reached its peak during the 1920s. The buildings in the Capitol View Historic District reflect the varied popular taste in architecture during the period 1900-1940; the district's architectural variety is characterized in its eclectic strain of Colonial Revival cottages, Craftsman, period revival and Minimal Traditional styles. Frequently within a particular style, homes in the Capitol View Neighborhood are found in both medium-scale and modest-scale versions of the same basic plan.

The earliest extant houses in the Capitol View neighborhood were constructed 1900-1919. Of these only a few are Queen Anne in style and are small cottages. Examples of the district's Queen Anne houses are seen at 204 Barton, 114 S. Dennison, 115 S. Dennison, and 212 S. Park. Typical Queen Anne characteristics such as fishscale shingles in gable ends, beveled corners, and decorative spindles on porches distinguish these small versions of the style.

Only a few houses in the district are representative of the American Foursquare style, popular from the turn of the century to 1930. The American Foursquare style examples in the Capitol View Neighborhood are largely confined to the additions south of West Markham Street. Houses at 108 Thayer, 206 S. Park, 116. Barton, 230 S. Rice, 107 S. Dennison, 108 Pearl clearly express the characteristic square shape with hipped roof and one-story full front porch. However popular the style was nationwide, there are only a few examples in the district, perhaps because they were a larger and more expensive house than the development of the neighborhood dictated.

The majority of the homes in the Capitol View Neighborhood Historic District were constructed in the period from 1920 to 1939. The design of these houses reflects the popular styles of the era, notably Craftsman, Craftsman Bungalow, and the Period Revival styles.

Craftsman style features such as low pitched, gable roofs accentuated by wide unenclosed eave overhangs with exposed roof rafters, as well as tapered square columns on pedestal porch supports are frequently seen in the houses in the Capitol View Neighborhood. Many of the Craftsman houses in the neighborhood were constructed with combinations of wood, brick, stone and stucco veneers.

Two-story Craftsman style examples found in the Capitol View Neighborhood include the houses at 129 Thayer and 111 Fountain. These homes offer the stylistic exposed rafters and generous overhang. Narrow clapboard wood siding is combined with stucco in front facing gable ends and brick porch supports. Fenestration on these houses feature the characteristic Craftsman double-hung four vertical pane over one sashes.

The Craftsman Bungalow is the dominant style found in the neighborhood. These one-story and one and one half story homes are located in all areas of the Capitol View Neighborhood. The American Craftsman Bungalow became the "cottage" of the early decade of the Twentieth Century. It began as a small Craftsman house but acquired a wide diversity of stylistic influences, specific examples showing links with many popular American architectural styles. The American Bungalow adapted itself to widely divergent environmental and climatic conditions, made use of numerous kinds of local building materials and ranged in size from spacious versions to small, low-income residences constructed specifically to meet the need for small affordable housing.

Representing the 1920s and 1930s, the most prolific era of growth in the Capitol View Neighborhood, several areas of Craftsman Bungalows were constructed in groups. For example, seventeen of the nineteen houses along Lloyd Court were constructed in 1925-1926 by local developer Lloyd A. Judd at a cost of $3,000 each. Similarly, the 100 block of Pearl Street contains a series of Craftsman Bungalows built in 1923 by the England family of the England Loan and Trust Company.